So far, we had monoids (and semigroups), as well as an algebraic structure for

-words. In the future, we will also study algebraic structures for other kinds of words, e.g. words indexed by countable total orders, or maybe even arbitrary total orders. Before presenting those structures, we will introduce some general theory, which will allow us to skip some of the standard symbol-pushing that is common to all algebras. This general theory is monads. The idea is that the notion of finite nonempty words is one monad, while the notion of

-words is another monad.

Definition. A monad, consists of the following ingredients:

, called the structures over

, called the lifting of

These ingredients are subject to axioms called “functor”, “natural” and “monoid” that will be discussed below.

Example. The monad of nonempty finite words is defined as follows. The structures over

, i.e. the nonempty finite words over

is obtained by applying

to each letter of

. The unit operation maps a letter to a single letter word consisting of this letter.

We now begin discussing the axioms of a monad. When reading the axioms below, it is a good idea to check that they are satisfied by the monad of nonempty words in the example above.

Functor axioms. The first group of axioms is that the first two ingredients of a monad are a functor in the sense of category theory. This means lifting is preserves the identity and composition of functions. Preserving identity means that if we lift the identity function on

, the result is the identity function on

. Preserving composition means that for every functions

Natural axioms.  The second group of axioms is that for every function

, the following diagrams commute. This means that flattening and unit are what category theorists call natural transformations.

Monoid axioms. The first monoid axiom says, essentially, that applying the unit to a structure (i.e. an element of

) and flattening has no effect. The expression “applying the unit to a structure” is ambiguous in the sense that it has two different interpretations, and both interpretations are dealt with in the axiom, which says that the following diagram commutes for every set

The second monoid axiom is the most important one. It says that if we start with a structure of structures of structures, and we flatten it twice, then we get the same result regardless of which order of flattening we employ. The appropriate commuting diagram is given below.

This completes the axioms of a monad, and therefore also the definition of a monad.

Definition. An Eilenberg-Moore algebra for a monad

, called the universe of the algebra, and
• a multiplication operation

is the identity on

, and which is associative in the sense that the following diagram commutes

Instead of Eilenberg-Moore algebra for a monad

, and use the convention that the universe of

) is written by a non-boldface letter

), while its multiplication operation is denoted by

Free algebra. For a set

-algebra as follows: the universe is

, while the multiplication operation is flattening. The two monoid axioms of a monad imply that this is indeed a

-algebra. By abuse of notation, we denote the free

.  For example, in the special case of the monad of nonempty finite words, the free algebra is

. The reason for the name free is given in the following lemma.

is a set, then for every function

to the universe of

there is a unique homomorphism of

which extends it in the sense that the following diagram commutes

Proof. Let us first show that if the homomorphism

exists, then it is unique. Suppose that

is a homomorphism which extends

in the sense of the diagram above. Consider the following diagram: 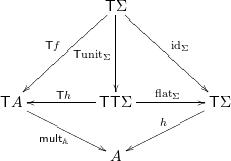 The left triangular face commutes by applying the functor

is a homomorphism. Therefore, the perimeter of the diagram says that

must be equal to

followed by multiplication in

. We now show that

defined this way really is a homomorphism.

Being a homomorphism is that the perimeter of the following diagram commutes. 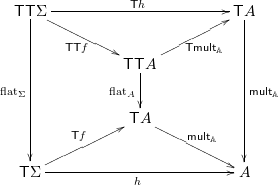 The lower triangular face is simply the definition of

, while the upper triangular face is the definition of

Thanks. This material is extremely helpful. If I am not mistaken in the commutatitve diagram of the monoid axioms of monad there should be id_{TX} rather than id_{X}. (Each Set has its own identity morphism)

Very nice course notes indeed! Just a minor suggestion: in your definition of monad, please replace the term "lifting" by "extension". These terms have a technical meaning in category theory, where extensions happen along the domain, while liftings happen along the codomain, see, e.g., https://ncatlab.org/nlab/show/Kan+extension. Reversing this convention is bound to cause confusion at some point. Sincerely yours,