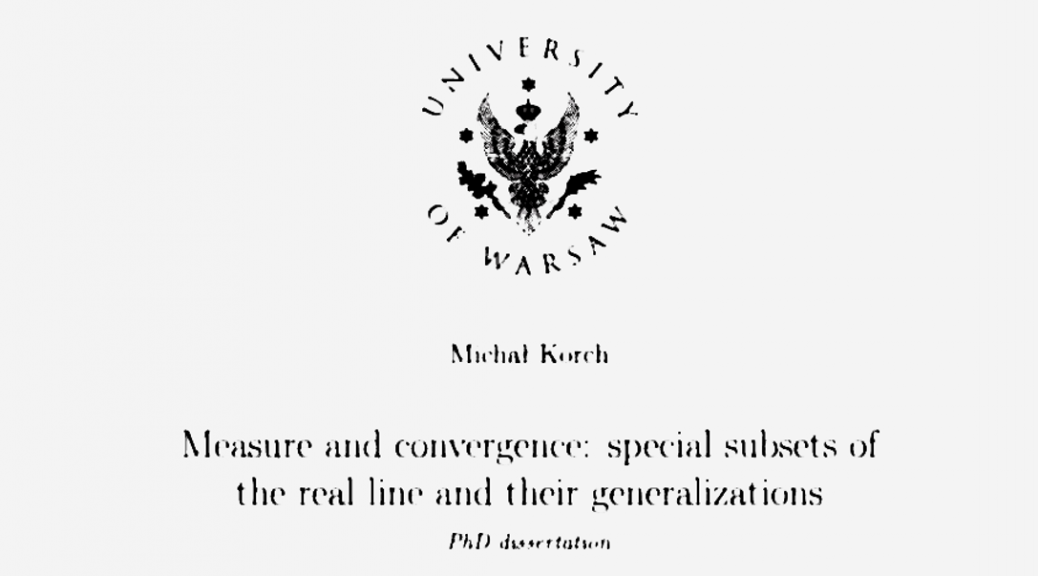 My doctoral thesis Measure and convergence: special subsets of the real line and their generalizations and the summary.

Reviews: by Prof. Balcerzak and by Prof. Żeberski.

The thesis was defended in February 2018.

In this thesis I present different notions of special subsets of the real line and their properties, in particular of those related to measure and convergence. We search for answers to open questions in this subject and we consider generalizations of known facts in the case of a larger cardinality, i.e. in the generalized Cantor space

, for an uncountable cardinal

, equipped with the topology generated by sets of extensions of partial functions.

First (Chapter 2), we discuss special subsets of the Cantor space

. The theory of special subsets is already well developed. I introduce two notions of such sets, which were not considered before: the class of perfectly null sets and the class of sets which are perfectly null in the transitive sense. These classes may play the role of duals on the measure side to the corresponding classes on the category side. We investigate their properties, and although the main problem of whether the classes of perfectly null sets and universally null sets are consistently different remains open, we prove some results related to this question and study their version on the category side.

Many of the classical notions of special subsets of

can be considered in the case of the generalized Cantor space

. Although the theory of the generalized Cantor space

has recently been broadly developed, the theory of special subsets of

seems to be largely omitted from those considerations. We study those classes of sets in this setting. It turns out that many of properties of subsets of

can be easily proved in

, although sometimes one has to use some additional set-theoretic assumptions (Chapter 4). Next we deal with less common classes of small sets in

In Chapter 6, I present different types of convergence of

, and study properties of special subsets of

related to the notion of convergence. We relate those properties to the sequence selection principles. We also consider convergence of sequences of points and functions with respect to an ideal on

Finally (Chapter 8), to relate measure and convergence properties in

, we study the possibility of introducing Egorov’s Theorem in

. Since no method of constructing measure in

which fulfils all reasonable requirements is known, we consider the properties such set-function should have to enable the proof of Egorov’s Theorem. I leave the question of existence of such a function which satisfies some additional reasonable conditions open. Every

-strongly null set is null with respect to such a set function which satisfies some additional properties. We study also the ideal version of Egorov’s Theorem in