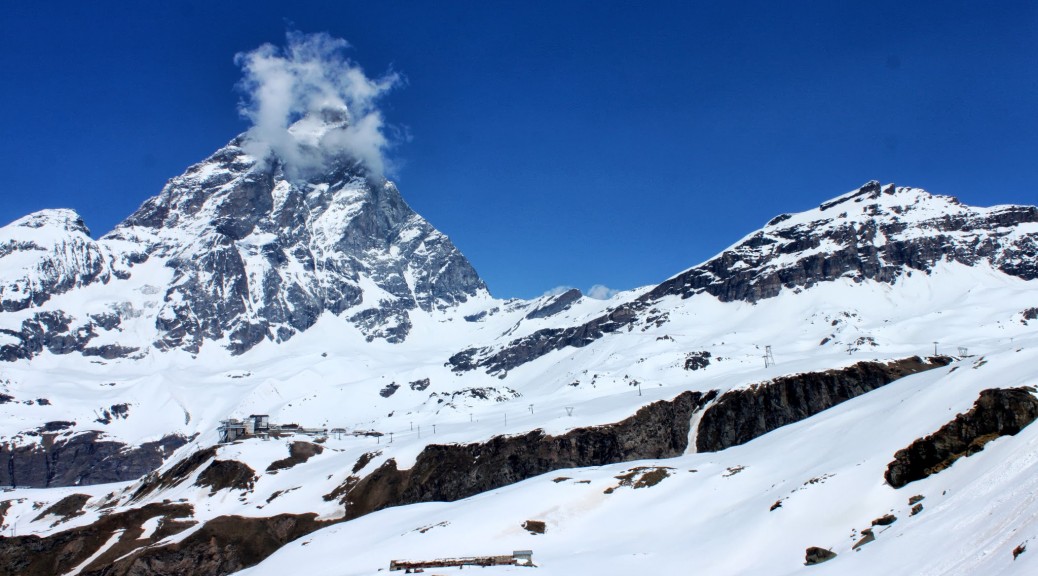 It was June. Purely theoretically. Because Matterhorn was standing with its feet deep in the snow. Its head was sometimes partially hidden in small clouds, but there were moments when its face was fully visible. And this vast space between me and it. That was absolutely striking. Immense, hardly limitless space. To understand the feeling you have to experience it. Words or even photos are insufficient. Actually it was not easy to keep going, because tearing your eyes away from the mountain was quite a complicated task.

This mountain, which moved me from sweaty summer into this early spring (with crocuses, pasque-flowers and marmots), and which is so high, must somehow have control over time and space — I thought. Probably it knows everything, all that I know not. But it lacks mouth, so it simply cannot share this knowledge with me.

I arrived to pre-season Breuil-Cervinia in the morning with a heavy backpack (for conference, including poster, and for my private additional 2-week mad sightseeing Italy trip) and an intention to trek some way upwards. I trudged through melting snow, not fully prepared, between first flowers making also their way through the snow. Soon it turned out that my feet were freezing and my boots were full with water at a temperature of zero degrees Celsius. So I turned back near a lake invisible under the snow. I swiftly washed myself in a stream in the valley and returned to the bus stop (there was wi-fi there). I spent my night under starry sky in some thicket near Chatillon train station.

A group of Vietnamese women were waiting with me for the first morning train in Torino direction, presumably on their way to work. They were trespassing on the railway tracks to the platform (which was forbidden in three languages), and one of them tripped in quite a comical way. Second woman trying to help the first fell as well and they started to argue funnily in their language. People on the whole platform started laughing which is not a frequent phenomenon at five in the morning.