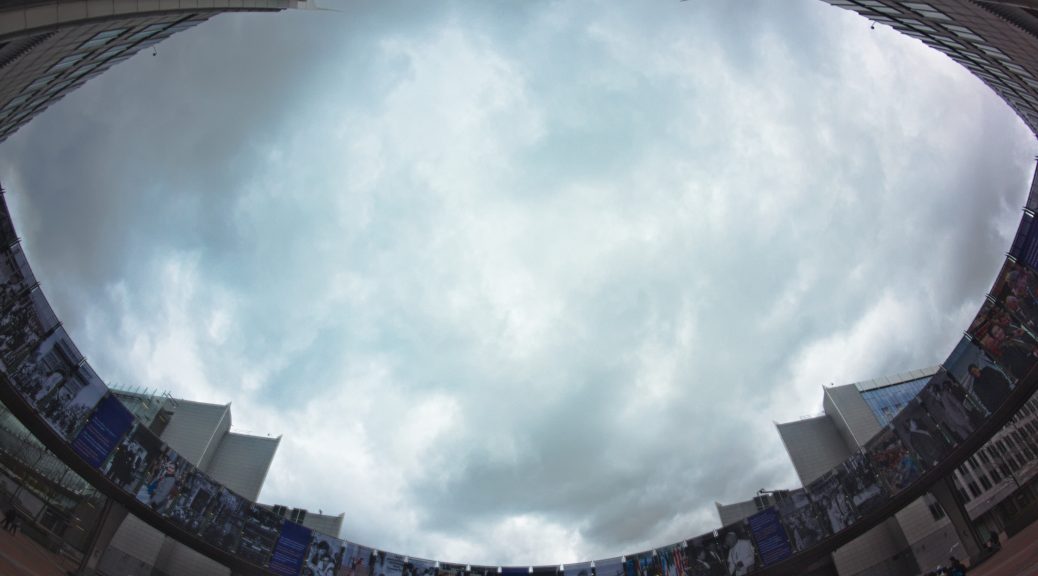 I start with the elegant Place du Luxembourg which is still a part of old Brussels but already dominated by buildings of the Brussels part of European parliament in the background. Further on, the mall of the Parliament surrounded by a circle of photographs on the circular overpass around Espace Léopold. Now you have to walk under some of the buildings, and you can see the flags of countries standing outside the parliamentarian Hemicycle actually standing in Leopold Park, but connected to the rest of the building with an overpass at its second floor. Actually, overpasses between building are constant theme of the local clerical architecture. On the other side of Leopold Park, on the flowery and spring Place Jean Rey I see the first squad of soldiers armed as if they were fighting a war. Such views are underway till the end of my walk. Rifles, military trucks, kevlar helmets and bulletproof vests do not rhyme with european blue flags in the background. Finally, Schuman roundabout surrounded by a big complex of European Council at one side and famous starry building of Commission at the other side. For desert I get again some classical elegance of Parc du Cinquantenaire nearby the main mosque of Brussels (in an oriental building from 19th century), huge Belgian flag hanging from a huge arch, the monument of victims of terrorist attacks covered with white roses, and the monument of Schuman. In other words, a walk around the capital.