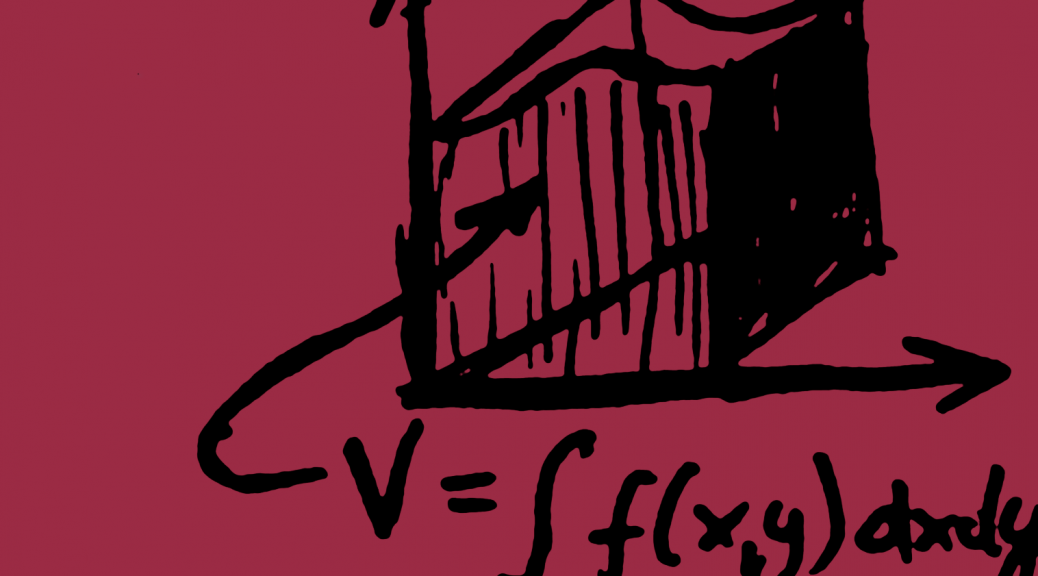 is simply the volume under the graph of

over the given set.

. So the volume is

is the triangle mentioned above.

How to calculate this integral? It will be described below.

Fubini theorem states that such an integral is the integral over

of the integral over

, and i the same as integral over

of the integral over

, in other words (for functions nice enough):

Obviously you have to treat the outer variable as a constant parameter when calculating the inner integral.

Therefore, returning to our example of the pyramid, the section at

Integration with change of variables

is a diffeomorphism, the following theorem holds

If we want to calculate the volume of a set

we can do it using one of the following three methods:

is the height at

is the area of the section for given

. Therefore the section at

Volume of a solid of revolution

If we take a graph of a function

and revolve it around axis

, we will get a solid of revolution. Since the area of a section for given

, from the above considerations we get that the volume equals

Very often physical variables can be described as a surface area or volume under a graph of another variable, i.e. as an integral. E.g. the change of position is the area below the graph of speed (because speed is the derivative of position), the force applied by a fluid is the integral over pressure, the mass of an object is an integral over its density at each point. Such situations can be expected whenever if the variable is constant on the whole length/ area / volume we would multiply it by length / area / volume.

Average value of a function

Similarly the average value of a function (i.e. average height of its graph), is simply the area/ volume under the graph (i.e. the integral) divided by the length/area of the base.

The centre of mass along

axis, is a point

, such that the torque of weight (i.e. length of lever arm times mass times a constant, which here can be omitted) is equalized. Let us say that the mass of a section for given

ends of a studied object. Thus,

is the whole mass. Thus,

. Notice that in order to calculate

we usually also have to calculate integrals.

Line integral of a scalar field

described as a parametrization

(e.g. as a route of a moving point). Assume that there is a value

associated with each point, e.g. density of the material. We can calculate the mass of the whole curve between

. It is clear that since the change of position is the are between the graph of speed and the velocity is

, so the length of the curve is

. Thus, to calculate its mass we have to multiply it in every point by the density, i.e.

and this is actually what is called the line integral of a scalar field.

Surface are of a solid of revolution

Thus, if we have a function

, its graph is described by the parametrization

. Thus, its length is simply

Now, if we revolve it around

axis, then at given

, so the surface area of the solid of revolution is

Line integral of a vector field

(imagine a rigid wire), described by a parametrization

. Imagine a bead moving along this wire. This time, not a scalar but a vector is associated with every point of the plane, e.g. a force which would be applied on the bead in this point. Let this force have an

We would like to calculate the work which is subtracted (or added) by this forces when moving the bead in the indicated way along the wire. This is exactly the line integral of the vector field and is denoted by:

which is nicely shown by this animation (by Wikipedia).

is closed it is important to set its orientation (we would always assume anti-clockwise orientation, in the clockwise case one has to multiply the integral by

Green Theorem allows us to change such an integral into double integral, namely

is the area cut out by the curve