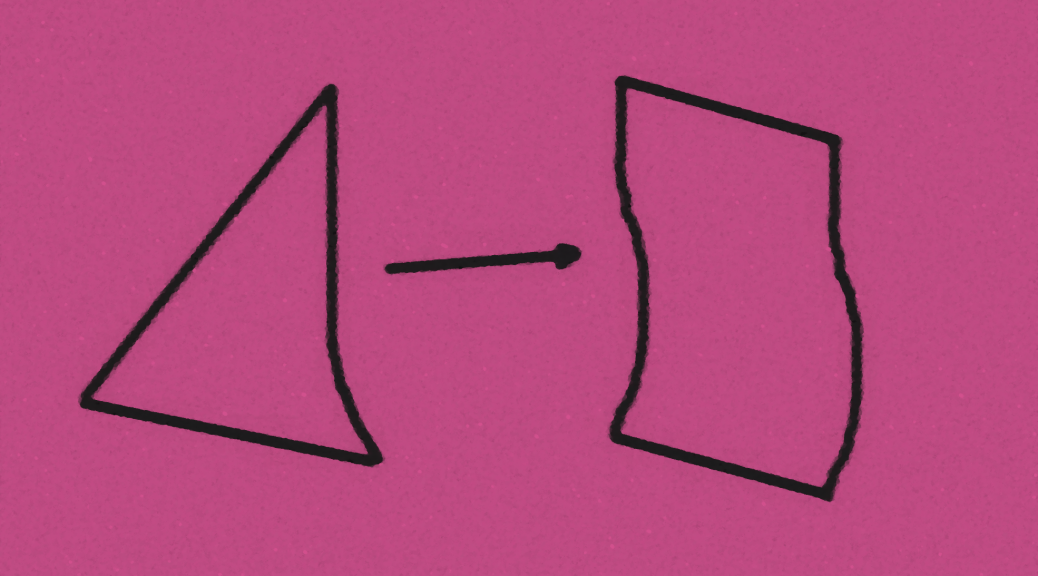 Notice that an equation

describes a curve on the plane. Imagining the graph of function

we see that it is its level line. The direction of this level line in the given point

, it means that the equation

and parallel to the tangent line to the considered curve at

. To get the equation of the actual tangent line we obviously have to change it:

In the three-dimensional case an equation

describes a surface, and analogously the equation of the plane tangent to it at point

is a function such that

(differentiable, and with continuous first order partial derivatives), and its inverse function is of

Intuitively, you can think of a diffeomorphism as of a transformation of an open such which may stretch it but not reap it and squeeze it but not glue any points together (continuity), not making and ,,folds” (continuous derivative).

A standard example of a diffeomorphism is the radial mapping

mapping the inside of the rectangle with vertices

onto the inside of a unit circle with centre in

without the radius from

and an open set

is a bijection (if

. Generally there is no inverse function — it is not possible to get out of

can be determined uniquely, we do not know the sign of

. We can write that

But in a neighborhood of a given point it may be possible. E.g. consider the point

— and it works. Looking at the Theorem, indeed,

is the same as

On the other hand at

) there is not inverse function since

This theorem describes when an equation of the form

defines some variables as function of the other variables.

Let assume that a function

values. We consider an equation (actually a system of euqations!)

and we ask, whether knowing

are uniquely determined. The theorem describes when it is possible. Notice that

matrix. We denote by

be open and let

. Then there exist open

and crucially a function

in a neighborhood of

E.g. let us consider the following system of equations

. The question is whether we can determine

and try to solve the problem manually. We have that

. We also know that

is positive (neighborhood of

We check whether it is consistent with the theorem. We have

and the determinant equals

, so the assumptions are met. Indeed,

), which is exactly the same as

may be equal to zero.