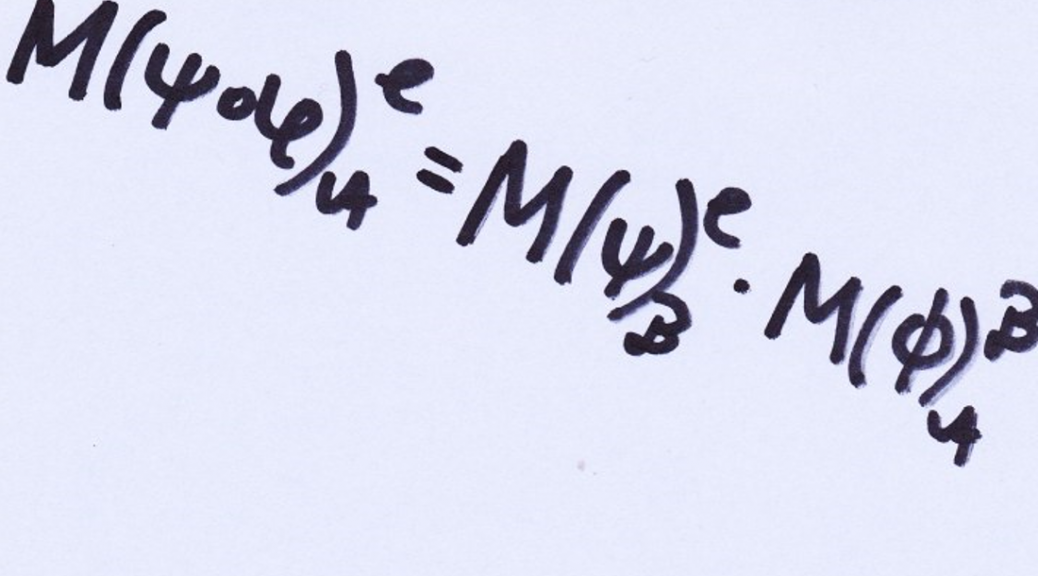 Matrix of a linear map

Matrices will be important for us for yet one more reason. It turns out that multiplying a matrix by a vector is actually the same as calculating a value of a linear map. Observe the following:

is exactly the same as

More precisely, given a linear map

will give the coordinates of

will be called the matrix of

In particular in the above example:

is the matrix of

simply by writing its coefficients in rows.

Assume that we are given a formula defining

, as above (or its matrix in the standard basis) and basis

, then I will get simply the first column of this matrix. On the other hand the first vector from

, has in this basis coordinates 1,0,0. Therefore the result of the multiplication are the coordinates of

and this is the first column of

and we have to find the coordinates of this vector in

, so the coordinates are 4,8 and this is the first column of the matrix we would like to calculate.

Let us find the second column. We do the same as before but with the second vector from basis

and the result via

getting a vector form

Such a map is denoted as

we can easily get the formula for

Now look at the matrices of those maps. If

, then given coordinates of

to get the coordinates of

we have to first multiply it by matrix

(we will get coordinates

) and multiply the result by

. Therefore we have multiplied the coordinates by

Notice which bases have to agree in this formula!

In particular in our example:

which is consistent with the formula we have calculated before.

There is a special linear map, which we call the identity, which does nothing. For example, in

we will get the coordinates also of

changes the basis from

It is easy to calculate the change-of-coordinates matrix change from a given basis to the standard basis. We will find

(basis is defined in the example above). After multiplying it from the right by

we will get its first column. On the other hand the first vector in

has in it coordinates 1,0,0, so the result of multiplication are the coordinates of this vector in the standard basis, so simply it is this vector. So simply the

-th column of this matrix is the

-th vector from the basis. Therefore:

Now, the other case: from the standard basis to a given basis. We will calculate

. It can be easily seen that in columns we should put coordinates of vectors from the standard basis in the given basis. Let us calculate them:

Changing the basis of a matrix — the second method: multiplication by a change-of-coordinates matrix

We have a new tool to change basis of a matrix of a linear map. Because

Obviously we get the same result as calculated by the first method.