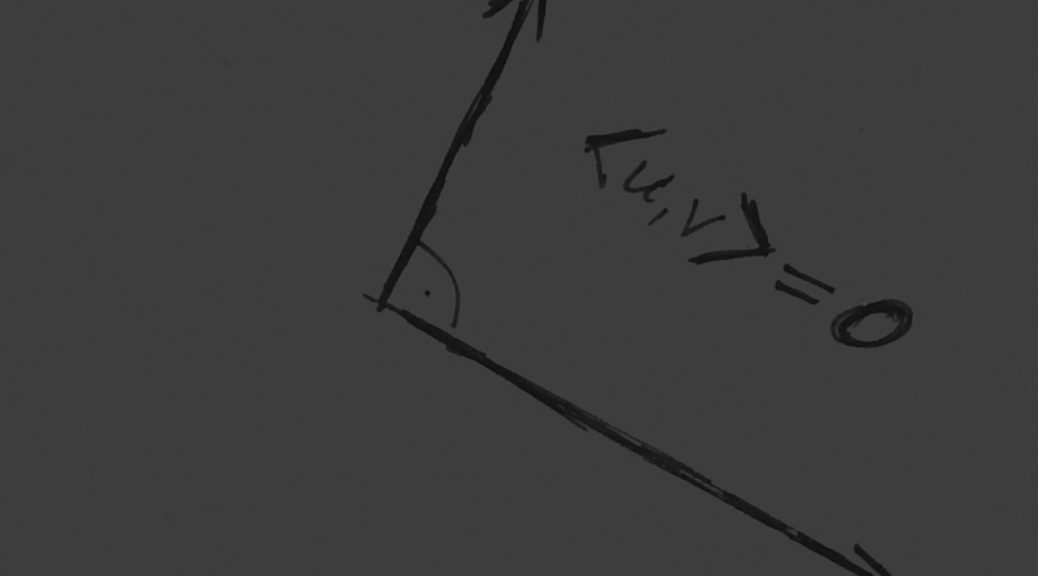 To study angles between vectors it will be convenient to use scalar product. A scalar (inner) product of two vectors

is sum of products on subsequent places, so e.g.:

A linear space over

with a scalar product is called an euclidean space.

Length of a vector and angles between vectors

is the square of the length of a vector, e.g.

. The length of a vector

, also called the norm of

, will be denoted as

. This motivates the definition:

Assume now that we are given three vectors

forming a triangle. So

be the angle between

. The law of cosines states that:

So cosine of an angle between vectors is defined by the following formula:

One more application of scalar product is calculating perpendicular projection of a vector onto a direction given by a second vector. Let

be the perpendicular projection of

onto direction given by

. It will have the same direction as

is the angle between

is the vector of length

Properties of norm and product

It is not very hard to prove the following

We know that two vectors

are perpendicular if cosine of the angle between them equals zero. Therefore

Notice that if we would like to find all vectors

, then the above is the equation we have to solve. Moreover this is a linear uniform equation. If we would like to find the set of vectors perpendicular to all vectors from a given list, then we will get a system of uniform linear equations. So given a linear subspace

(called the orthogonal complement of

) of all vectors perpendicular to all the vectors from

is also a linear subspace! It is the space of solutions of some system of linear equations.

in the space with standard product. A vector

, in other words, if it satisfies the following system of equations:

So the general solution has the following form:

, and therefore we have the following basis of

A basis of a space will be called orthogonal, if every pair of vectors in it are perpendicular. E.g.

is an orthogonal basis of

with standard product — indeed it is easy to check, that all pairs are perpendicular, e.g.

We will learn how to find such basis later on. Now let us notice that calculating coordinates of a vector in such a basis is fairly simple. Actually, we are calculating its projections onto vectors from the basis. Given vector

-th coordinate in an orthogonal basis, which has

in the above exemplary basis are:

. Given an orthogonal basis we can simply divide each of the vectors by its length to get an orthonormal basis. So

is an orthonormal basis of

. Notice that calculating the coordinates of a vector in an orthonormal basis is even simpler. Since

, we get that the

-th vector of the basis. Therefore the coordinates of

in the basis in the example are:

Projection onto a linear subspace

is a projection of a vector

is its projection onto

. Which can be nicely used when calculating a projection of a vector onto a plane in the case of three-dimensional space. Indeed, if

is a plane in

, then the perpendicular space is a line and is given by a vector. Denote this vector by

. Therefore the projection of

Orthogonal reflection across a linear subspace

We can use our ability to calculate the projection

, to easily calculate (see the image below) its image

Assume that we are given a space spanned by some vectors , e.g.

so only perpendicular ,,part” is left. In the case of the third vector we need to subtract projections onto both already constructed vectors:

In the case of more dimensions we will continue this procedure further.

In our case in the space with standard product:

So the basis we were looking for is

(I can drop the fractions since multiplication by a number does not change angles).

Notice that a projection onto a linear subspace

are linear mappings. Moreover, it is easy to see its eigenvectors:

So basis consisting of vectors from a basis of

and of vectors from a basis of

is a basis of eigenvectors of both those maps. Which make it possible to calculate their formulas.

in the space with standard product. Therefore basis

is the projection onto

are eigenvectors with eigenvalue

of both maps. Also

is an eigenvector with eigenvalue zero for

is a basis of eigenvectors of both maps, and::

Let us calculate their formulas. We have:

Given a system of vectors

in an euclidean space, the matrix

. Immediately on can notice, that Gram’s matrix is symmetrical.

Notice in particular, that if the columns of a matrix

contain the coordinates of those vectors in a othonormal basis, then

. Thus, if the number of vectors

equals the dimension of the whole space (i.e. if

is a square matrix), then

. And it is equal to zero if and only if the system of vectors is linearly dependent.

A generalized inner product of

(it is not necessarily positive definite).

the Gram’s matrix of a basis. We can then check whether the considered generalized product is an inner product.

be the size of the matrix. Sylvester’s criterion states that if for any

, the product is positively definite and thus is a inner product.