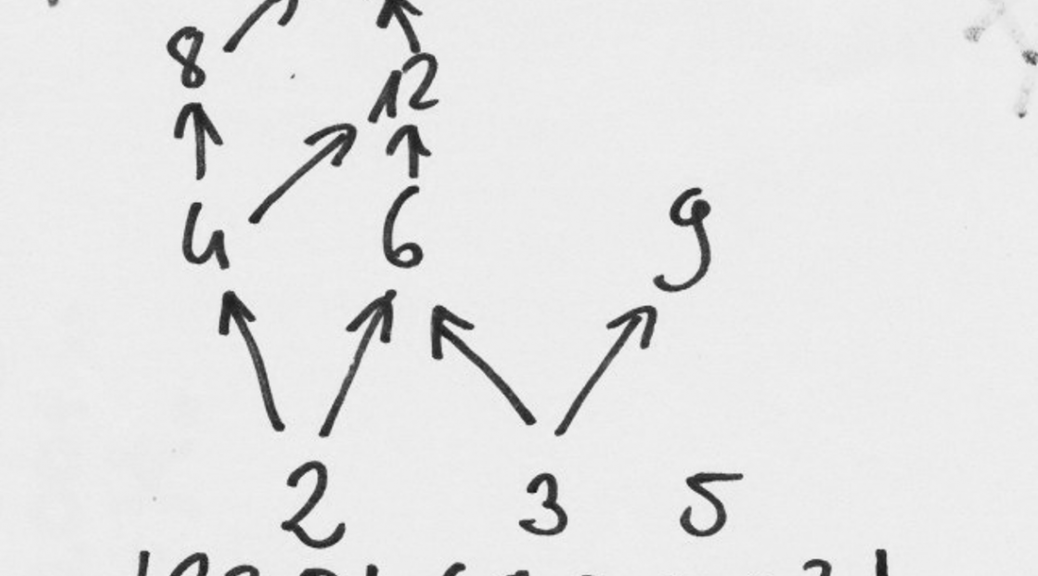 will be called a partial order if it satisfies the following three conditions:

on the reals is an example of a partial order. Indeed, it is reflexive, antisymmetric and transitive.

The relation of divisibility on the natural numbers is an another example. It is a partial order, because

(antisymmetry), and finally if

, is also a partial order.

On the other hand, a relation

, is not a partial order, although it is reflexive and transitive, because it is not antisymmetric:

For any partial order

, we can consider its strict version

(which is formally not a partial order, because it is not reflexive), i.e. the order

Simple orders on finite sets can be easily graphically presented in the form of a Hasse diagram, in which greater elements are placed above the less elements, and neighbouring elements in the order are connected with lines. E.g. the following diagram shows the order of divisibility on be a partial order on a set

. We shall say that

In the above example, we have three minimal elements:

. Therefore the least and greatest elements do not exist. On the other hand in the order

there is one minimal element:

and it is also the least element. There are no maximal elements, and the greatest element does not exist.

, we now consider a subset

. We shell say that

. The set of its lower bounds

has the greatest element, so

and it is the least element of

. The set of all upper bounds is

. This time it is not an element of

. On the other hand, let

. This set has the greatest element, so it is its supremum,

. Meanwhile, the set of its lower bounds is empty, so the infimum of

is dense, if for all

is dense, because if

is not dense, because there does not exist such

is linear, if all two elements are comparable, i.e. if

is an example of such an order. On the other hand,

is not linear, because neither

is well founded, if every non-empty subset

which is strictly decreasing). Therefore, for example,

is a well founded order. The same is true for

. But neither the order

is not well founded.

A partial order is a well order if it is well founded and linear. The order

is a well order, but

is not, because it is not linear.

it is easy to define an order on

Similarly, one can define an order on

, will be called an order isomorphism, if it is a bijection, and if for any

Orders such that there exists an order isomorphism between them, will be called isomorphic. It means that those orders are identical from our point of view. For example,

. Indeed, it is a bijection, and

minimal elements. If an there are exactly

, then those two orders cannot be isomorphic.

are not isomorphic. An invariant, which differs them is e.g. the following sentence: there exists an element which has exactly

elements less or equal to it. In the first ordered set such an element exists: e.g.

. In the second there is no such element, because the number of subsets of a finite set is always a power of

There are a few important statements which are equivalent to the axiom of choice. On of them is Zermelo Theorem, which states that on every set one can define a well order. Other such statement is Zorn’s Lemma. It states that if

is a partially ordered set with

is a chain, if any two elements of

are comparable with respect to

) has an upper bound, then there is a maximal element in

Zorn’s Lemma is an important tool in mathematics which can be used to prove the existence of many important objects. E.g. on can prove that every vector space has a basis (a set of linearly independent vectors which is maximal with respect to inclusion) using Zorn Lemma. Indeed, let

be a vector space, and let

be the family of all linearly independent sets in

be a chain in

. We will prove that

is a chain, we among those

sets we can find a set which contains all other as its subsets. Let it be

, it is also linearly independent. Thus,

is an upper bound of

. Hence, there exists a maximal element in

, i.e. a maximal set of linearly independent vectors, in other words a basis.