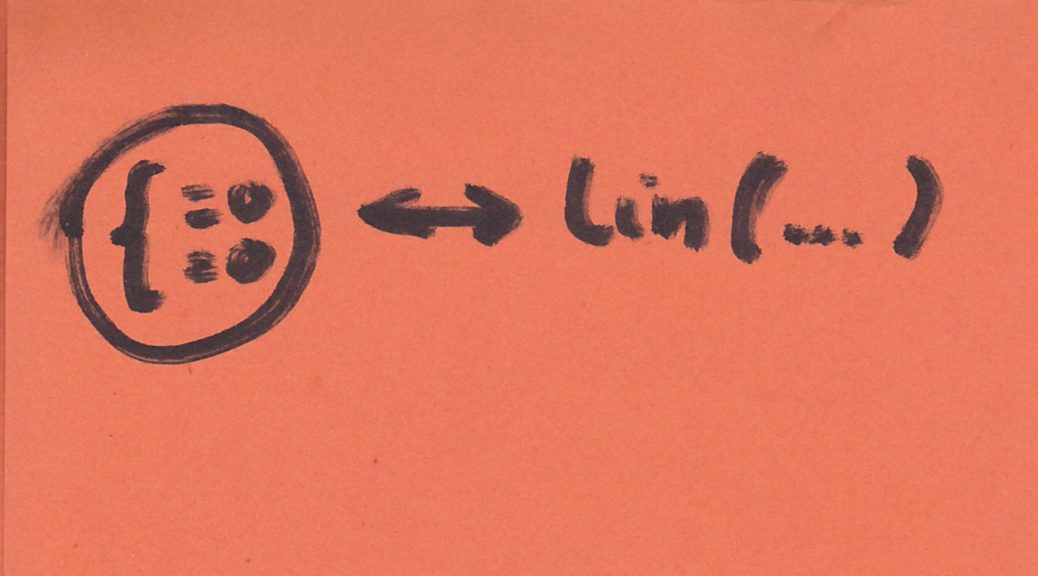 How to describe mathematically a given vector subspace of

? There are few ways:

The above needs few more words of explanation. We would also like to know how to move from one of the descriptions to another.

A spanning system of vectors

It is easy to notice that the set of all linear combinations of a given set of vectors is always a vector space. We check it in the case of three vectors, let

and for any number k,

are also linear combinations of

, so we are dealing with a vector space.

are examples of vector spaces, defined by listing the sets of vectors which span them.

A system of vectors which spans a given vector space and additionally is linearly independent is called its basis. Basis of a vector space is not unique, e.g.

(so called standard basis), and also

Every vector in the given space is a linear combination of vectors from the basis. Furthermore, the coefficients in this combinations are uniquely determined and called coordinates. So, e.g. the vector (1,1) has coordinates 1,1, with respect to the basis

and (0,-1) with respect to the same basis has coordinates -2,-1. Obviously, we calculate the coordinates of a given vector with respect to a given basis by solving a system of equations. We have done it already before while determining whether a vector is a linear combination of other vectors. This time the system will always have exactly one solution.

It is clear from Steinitz Theorem, that a system of vectors in a finite dimensional space is a basis if and only if it satisfies at least two of the following conditions (the third one is satisfied then as well): it is linearly independent, it spans the whole space, and the number of vectors in it equals the dimension of the space.

A system of equations describing a space

Notice that given a homogeneous system of linear equations and two its solutions, both their sum and a solution multiplied by any number are also solutions of the system. Let us check it in the following example. Vectors (1,-1,0) and (0,2,2) are solutions of the equation

Now let us learn how to when given one form of description find another one.

Given a set of vectors we would like to find a linearly independent set, which spans the same space. We have mentioned that in a matrix when we carry out the operations on rows we do not change the set of possible linear combinations of vectors written in the rows. Furthermore, notice that in a echelon form of matrix all vectors from the non-zero rows are linearly independent. Indeed, to get the zero vector in the combination of them, we need to multiply the first one by zero because of the first place. Therefore, we need to multiply the second one by zero because of the second place. An so on. Thus, all we need to do is to write the given vectors in the rows of a matrix and calculate its echelon form. The non-zero rows form a basis of the space.

For example, let us find a basis of the space

is a basis of the given space, and the space has dimension 2.

We start by finding a general solution to the given system in the parametrized form. E.g.

so the general solution is of form:

, so every vector in the given space is of form

. Therefore every vector in the space is a linear combination of vectors

, which I have calculated by substituting

for one parameter and zero for others. It is also easy to see that those three vectors are linearly independent. So a

is a basis of the space and the space has dimension

Assume that we study the vector space

. Therefore, our system of equations will have 4 variables. Assume that there will be an equation of form

in it. The three given vectors have to satisfy this equation. So

So the general solution, which will tell us what are the coefficients in the system we are looking for, is the following:

. Notice that the system we are trying to find is not unique, many systems of equations are equivalent. Actually, the set of possible coefficients of an equation which is fulfilled by any vector in the given space forms also a vector space. We write down its basis using the calculated general solution:

. If we take those two vectors and write down two equations with such coefficients we will be able to get any equation which is fulfilled by any vector of our given space by combining them linearly. It means the system we look for is the system with coefficients from the calculated basis, namely:

And we are done!

Rank of a matrix

This is the theorem which describes when a system of equations has a solution in terms of ranks of matrices.

be a matrix of a system of equations

without the column of free coefficients, and

be the matrix of this system of equations with this column. Then the system

has a solution if and only if

. Moreover, the dimension of the space of solutions of the homogeneous system of equations

is the number of variables. Also, if

is a solution of

is the space of solutions of homogeneous system of equations

, then the set of solutions of