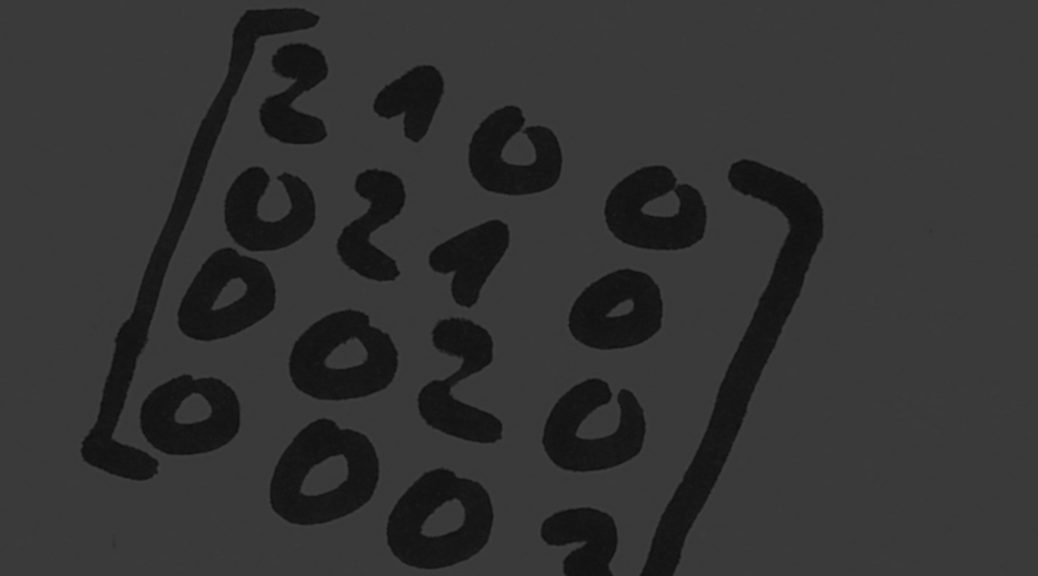 So this is an example of a matrix in the Jordan form: 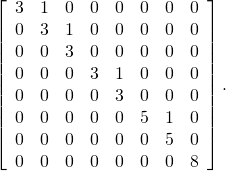 Jordan theorem states that for every matrix such that its characteristic polynomial can be decomposed into expressions of degree one, there exists a similar matrix which is in Jordan form. In particular, it is true over an algebraically closed field, e.g over

Translating it to the language of linear mappings

, for every mapping, the characteristic polynomial of which can be decomposed into expressions of degree one, there exists a basis

(called a Jordan basis), such that the matrix of this mapping with respect to this basis is in Jordan form.

In particular, it means, that if

are the numbers of columns in which the Jordan blocks start, then vectors

are eigenvectors for eigenvalues

, and the rest of the vectors (for

in the last block) are such that

(it is implied by the matrix, the one immediately over the diagonal is responsible for adding the previous vector). Vectors

are the first in their blocks, and

are the last in their blocks.

Let us think how to find a Jordan basis (and prove Jordan Theorem). We are going to do it recursively.

E.g. let us find the Jordan basis for

be a mapping defined by this matrix. We check its eigenvalues.

, so the only eigenvalue is

is a Jordan basis for

, because those vectors are eigenvectors for eigenvalue zero. Both are starting and ending vectors of their blocks. We have to find

is a Jordan basis both for

Powers of matrices in Jordan form

It is easy to notice that it is relatively easy to calculate powers of a matrix a Jordan form. The zeroes under the diagonal and outside of Jordan blocks are still there, and a power of a matrix

in a Jordan form has simply powers of its Jordan blocks on the diagonal.

You may notice that

In particular, it becomes easy if

-th power of a Jordan block

has only zeros except for the places

places over the diagonal, where there are ones (if

Generally, the rank of a

-th power of such a block equals

and zero otherwise. But the rank of the power of any other Jordan block is always equal to its size.

Notice that it means that the rank of Jordan blocks for eigenvalue zero decreases with taking higher and higher powers by one, until it reaches zero. This sensitivity (and the fact that the rank of a matrix does not depend on a basis) can be used to determine a similar matrix in the Jordan form without calculating a Jordan basis.

equals to the number of Jordan blocks for eigenvalie

Similarly as in the case of diagonalizable matrices, we can use Jordan form to calculate a power of a matrix, if the characteristic polynomial of which can be decomposed.

So the matrix in Jordan form is

because it is the only case for eigenvalue

different from the identity.
It is easy to notice that

It is clear that the eigenvector for

is a Jordan basis.
We get