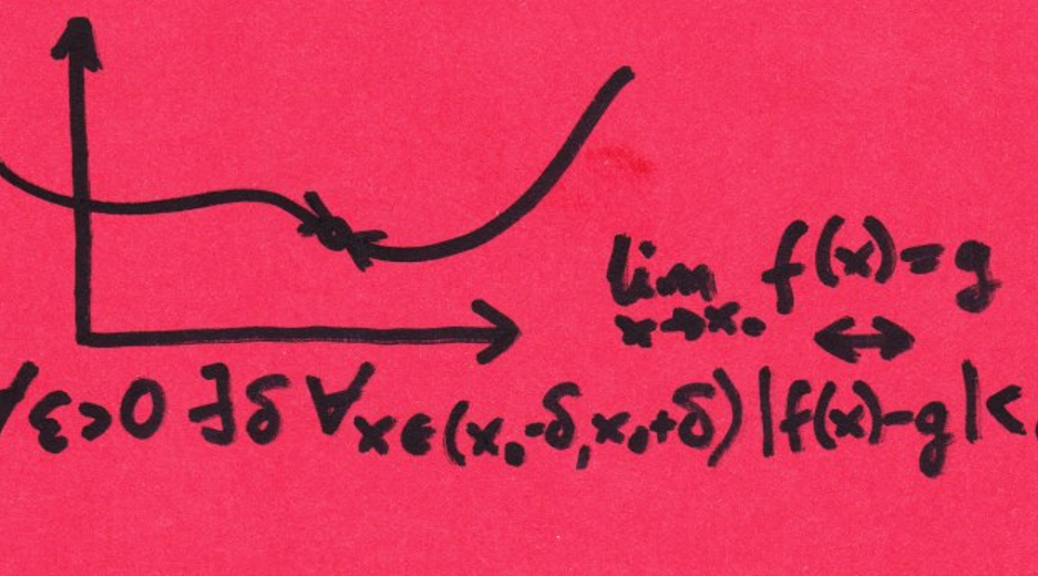 Limit of a function in a point

We will say that a function

has at a point

), if for any sequence

and such that for any

, the limit of the sequence

, because from the arithmetic of limits of sequences we know that if

has no limit at

The equivalent definition is the following. We will say that a function

which means that for arbitrarily positive small number

there exists a small interval around

, such that values of the function in this small interval differ from the limit no more than

Let us check, that

. It suffices to set

Infinite limits and limits at infinity

. Simply we can take all sequences

, which converge respectively to

and look at the limits of sequences

, if for all sequences

are such that the limit of

Left limit (from below) of a function (denoted as

. Similarly we define right limit (from above) (denoted as

A function has a limit at

if and only if it has both limits in those points and they are equal.

We have the following theorem:

, if for some neighbourhood of

Sounds a bit complicated but is very convenient. E.g. let us calculate the limit of function

Asymptotes are lines which are lines to which the diagram of a function converges. Asymptotes can be vertical, horizontal or oblique. is a right vertical asymptote. Analogously, if

, this line is a left vertical asymptote. E.g.

is a vertical asymptote of this function.

is a respectively right or left horizontal asymptote of this function. Since

is a horizontal asymptote of

is an oblique asymptote (respectively left or right), if

. If such a line is asymptote (assume it is a right asymptote), then

is an oblique asymptote of this function.

A function is continuous at a point

. Obviously all simple arithmetic functions are continuous in every point of their domains. E.g. if

A function which is continuous at every point of its domain will be simply called continuous.

be a function defined in the following way:

This function is continuous in all points except

, and is not continuous at

be defined as follows:

This function is continuous for

, but is not continuous in

, and therefore it has no limit at point

defined in the following way:

is an example of function which has no limit in any point. Therefore is also not continuous at any point.

Continuous function on an interval

have the following (intuitively obvious) property: if

. Therefore, for example, since for

has at least one root in the interval

If we are able to choose

, in a such way that in any interval of length

values of functions do not differ more than

, universally regardless of place

, then we say that the function if uniformly continuous. More formally a function

is uniformly continuous, if:

is a very simple example. It is uniformly continuous, because for any

is continuous but is not uniformly continuous, because if

we choose, we can find