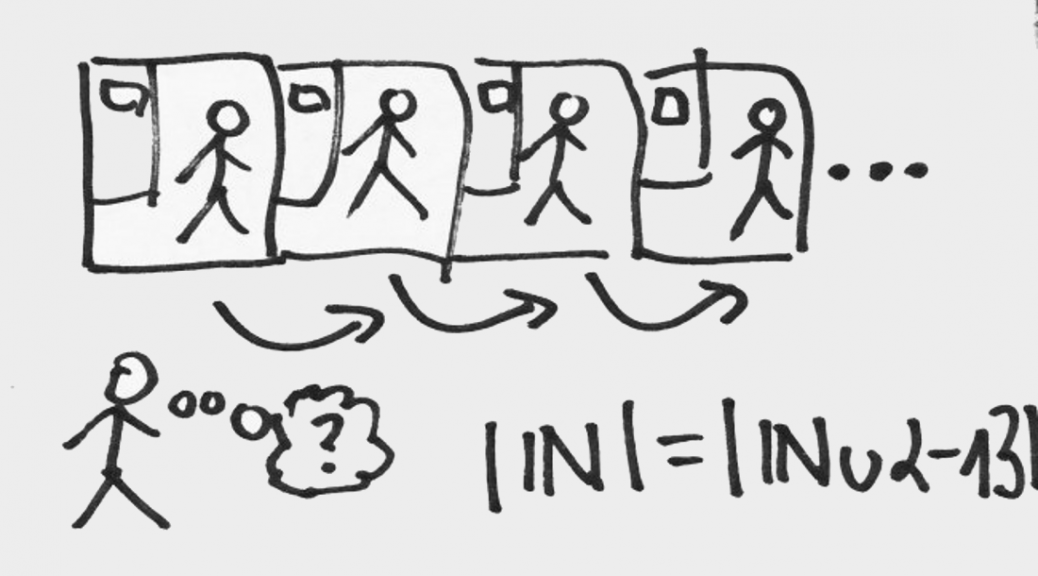 — a subset of domain, then the set of all possible values given by

, will be called the image

Given a subset of the set of values

, the sets of all arguments such that their values are in

, is called the preimage of

and we denote it as

is the set of all even numbers. If

is the set of even numbers, then

is the set of all natural numbers divisible by

is the set of odd numbers, then

is the set of even numbers.

Imagine a hotel with some number, e.g. five, single rooms. Assume that all the rooms are occupied. So if a new guest arrives, receptionist has to tell him that no room is available.

But what will happen if the hotel is infinite? Infinitely many rooms numbered 0, 1, 2, etc. single rooms (we will call such a hotel Hilbert’s hotel) and all those rooms are taken, and a new guest appears. Should the receptionist tell him that there are no free rooms? Wise receptionist do not have to. But if not he has to disturb all the guests: he can ask all the guests to step out to the corridor and move to the room with a number greater by one. From 0 to 1, from 1 to 2, from 2 to 3, and so on. All the guests will get a new room and the room 0 will stay free and can be given to the new guest! So Hilbert’s hotel can actually accommodate one more guest then the number of guest that can fill the whole hotel.

And what will happen if to an empty Hibert’s hotel arrive an infinite group of men and and infinite group of women? If the receptionist accommodates the women first, they will take all the rooms, and there will be no rooms for men. Wise receptionist will accommodate women and men alternately. Women to the rooms with even numbers and men to the rooms with odd numbers and therefore all people will fit in. Therefore Hilbert’s hotel can accommodate twice as many people as can fill the whole Hilbert’s hotel!

Sets of the same cardinality

How to check that two sets have the same number of elements? E.g. a set of some women and a set of some men. We can count elements in each of the sets. But there is also a second method. It suffices to match elements of both sets into pairs. If it is possible, the two sets have the same number of elements. This is a very nice method, since it can be also applied to infinite sets. In the language we have developed, matching elements into pairs, means finding a bijection (function onto and 1-1) between those sets.

We will say that sets

are of the same cardinality, if there exists a bijection between them. This fact will be denoted by

— the additional guest will be denoted here as

) and the set of rooms (enumerated with elements of

(non-negative numbers are men, and negative — women) with set

(rooms). This bijection is defined as follows:

One more example. Let us find a bijection between

. It is not very straightforward, we will need a set

, which will help us construct an appropriate bijection:

Are all infinite sets of the same cardinality?

. Let us give some arguments why real numbers, even only those in the interval

, cannot be accommodated in Hilbert’s hotel, in other words there does not exist a bijection

Assume otherwise, that such a bijection exists, so every point on the interval can be accommodated into Hilbert’s hotel, so

. Choose this interval out of the three, which does not include

. We divide the chosen interval into three parts and we choose the one that does not include

. Again, we divide the chosen interval into three parts and choose those which does not include

and so on. In the effect we will find a point which in not equal to

, and so on. Therefore it is not accommodated in Hilbert’s hotel, which is a contradiction, because we have assumed that all the points are accommodated.

Therefore we say that a set is at most countable if it is finite or countable.

We have already proved that the set of integer numbers

Notice that, although it may be surprising in the beginning, that the set

of pairs of natural numbers is countable. Indeed, we can enumerate them with natural numbers (or in other words we can accommodate them in Hilbert’s hotel), enumerating the subsequent pairs in order of the sum of their elements:

Secondly, notice that the set of all finite sequences of zeros and ones:

is also countable. We can enumerate its elements taking them in order of their length.

is countable — we can enumerate them taking them in order of maximal element.

From the above you can see that:

We can use the above facts to prove that a given set is countable.

The following theorems are relatively intuitive:

We shall say that the cardinality of

is not greater than the cardinality of

This is actually equivalent to existence of an ,,onto” function

is a function from

The Theorem of Cantor-Bernstein, states that if

have the same cardinality (so if there exist

is onto then there is a bijection

We shall write that

are not of the same cardinality. For example, we already know, that

We already know, that some sets are countable — of the same cardinality as

. We will say that such sets have cardinality

(aleph zero) — understanding this as the lowest possible infinite cardinal number. We know that not all sets are countable and there exist “bigger” sets, e.g.

. We shall say that a set of the same cardinality as the set of real numbers is of cardinality

— (continuum). Generally Cantor Theorem states, that for any set

. We see immediately that we can have an infinite sequence of sets of increasing cardinalities:

We also know that

. Therefore, it makes sense to ask, whether there exists a set of cardinality in between

is the lowest possible cardinal number greater than

? In other words if we enumerate the lowest possible infinite cardinalities as:

? This question is called the Continuum Hypothesis and was enlisted by David Hilbert on the Congress of Mathematicians in Paris in 1900 r as the first of 20 most important open problems which have to be solved during next 100 years.

By the way, notice the assumption of consistency of the axioms. Is such consistency not obvious? Actually it is not. Kurt Goedel proved that it also cannot be proven! We will never know, that the axioms are for sure consistent. But this does not diminish our faith in mathematics. 🙂

Returning to the ground, we have already mentioned some sets of cardinality continuum, in particular:

. It is relatively easy to prove that also the set of infinite binary sequences

I hope it is not necessary to mention that there are sets of cardinality greater than continuum. E.g. by Cantor Theorem,

Usually, we prove that a set

is of cardinality continuum, using Cantor-Bernstein Theorem. In particular we have to find sets

, of cardinality continuum, such that we are able to show functions which prove that

E.g. let us prove that the set

of all infinite sequences of even numbers

is a set of cardinality continuum. Take the set of all sequences of natural numbers. Then

is obviously one-to-one, so

, let be a the function which in a given binary sequence changes all ones into twos.

is again one-to-one, so

Diagonal method is a method of proving theorems quite popular in mathematics. For example, we can use it to prove Cantor Theorem for the set of natural numbers, in other words, that

, the set of all subsets of the set of natural numbers cannot be accommodated in Hilbert’s hotel.

Assume otherwise, that it is possible. Let

is the set accommodated in the

of natural numbers in the following way: if

(that is what is the motivation of the name of this method: we take or not number

as an element of

, depending on whether it is not, or is, an element of

, because only one of them contains

because they differ on

is a subset of the set of natural numbers, which is not accommodated in any room. We have reached a contradiction, because we assumed that every subset is accommodated.