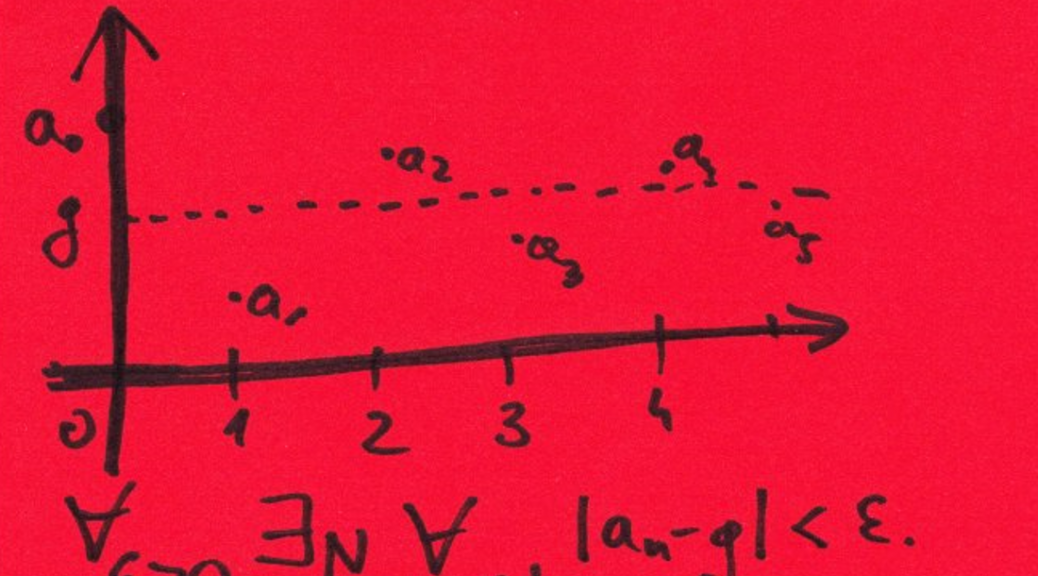 The notion of sequence convergence seems intuitively clear. A sequence

if its elements are closer and closer to

converges to zero. Speaking more precisely, for any

, does not converge to any limit, since for any

respectively and such that for any

, we have also that

Therefore if we study convergence of a sequence

we may try to find sequences

— this theorem is usually called the squeeze theorem.

We have a natural arithmetical theorem on limits. If

Let us calculate the limit of

, the numerator converges to

, the limit of denominator is

(we apply the theorem on arithmetic of limits). Therefore

(again we apply the theorem).

is bounded, if there exists

. We have the following theorem: if

converges to zero and

converges to zero. So

is such that for all

, so if for arbitrarily large number from a given place on the elements of sequence are greater then this number we say that the sequence tends to infinity and write

is such that for any

, we say that the sequence tends to minus infinity and write

. This sequence tends to infinity, because if

be sequences of real numbers. Then

Notice that this theorem does not tell anything about some types of limit operation, in which we can tell nothing about the limits. E.g. operations like

. In this cases usually some further calculations are needed to be able to use the above theorem.

Imagine that you have a bank account with interest rate of

a year! But you have only

in this account. If interest rates are calculated every year, after one year you will have

. If it would be calculated four times a year, you will get

. It is clear that the final amount of money increases if the frequency of calculating interest rate increases. How big this amount can be?

Obviously we ask about the limit of sequence

. The answer is quite surprising. The limit of this sequence is an irrational number, which plays a huge role in mathematics and is denoted by

, we can calculate limits of many other sequences, e.g.

is a Cauchy sequence. Indeed, let

It turns out that a sequence of real numbers is a Cauchy sequence if and only if it converges to a finite number.