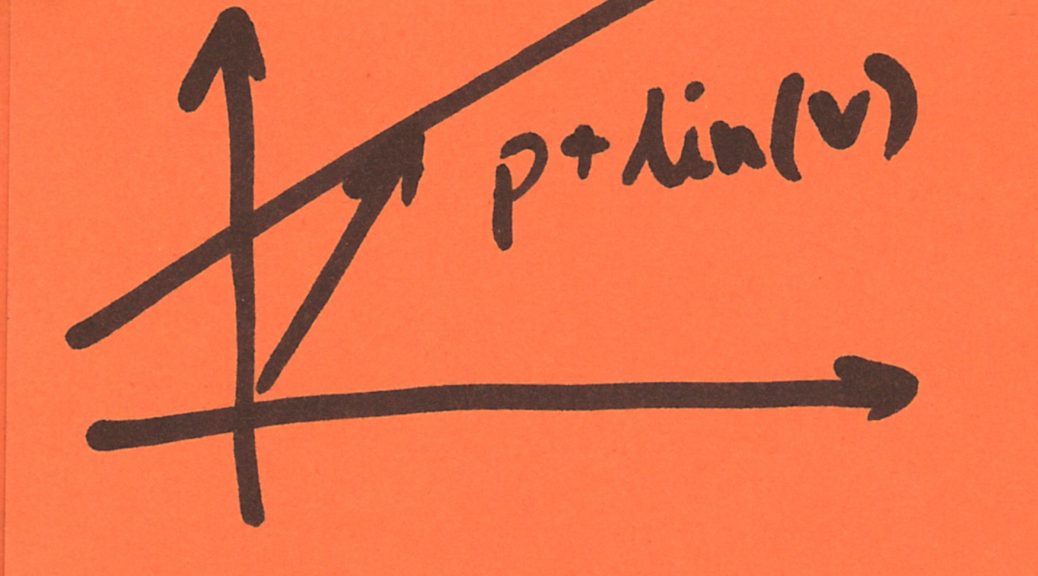 Cosets of a linear subspace

is a linear subspace of a vector space

is called a coset of

is a coset of the line

You can also see the cosets as equivalence classes of relation

has the same left-hand side as the system describing

, but it is not necessary homogenous — the right-hand side can be chosen in such a way that a given vector satisfies it and thus is in the coset..

their affine combination, if

The set of all affine combinations of points

are affinally independent, if none of them is an affine combination of others.

Affine subspaces of a linear space

Till now we have dealt with linear spaces, in particular in all our lines, planes and other subspaces the zero vector was always included. But obviously it makes sense to study also such spaces but translated from zero by a given vector. Such subspaces (are no longer linear) are called affine subspaces of a linear space. The term hyperplane is used to describe affine subspaces of dimension one less then the whole linear space we work in.

is a linear subspace and

is a vector, then

), is an affine subspace. The space

will be called the tangent space (or the direction) to

An affine subspace of a linear space can be described in the following ways:

As usually we would like to be able to change the form of description.

Given a translation vector and the tangent space, we can easily get the points, which are included in the considered affine subspace. E.g. if

, it can be also defined as the only affine subspace including points:

Reversely, if H goes through:

, choose one of those points as a translation vector, and we get that

A translation vector with the direction and parametrization

Given a translation vector and vectors spanning the tangent space we can easily get a parametrization. E.g. if

, then every vector of

we know that all the vectors of

— we already know how to find such a system and so

The given translation vector has to be a solution of the system we are looking for, so we have to choose the free coefficients in such a way that it will be true. So we can simply substitute the translation vector into the left sides of the equations:

. Therefore, the system of equations we are looking for is the following:

From a system of equations to a parametrization

Notice, that simply given a system of equations for

, its general solution is a parametrization of

is its affine subspace, if it is closed under taking affine combinations of (finitely many) points.

We say that a system of points

, which spans an affine subspace

is called its point basis. Then for every point

. These are the coordinates of

in this point basis.

is sometimes denoted by

Consider a coset of a linear subspace

is called the basic system of this coset. Notice that then

is its point basis. And also, if

is its point basis, then

is its basic system.

is a basic system of a coset

are unique and are called the coordinates of

with respect to this basic system.