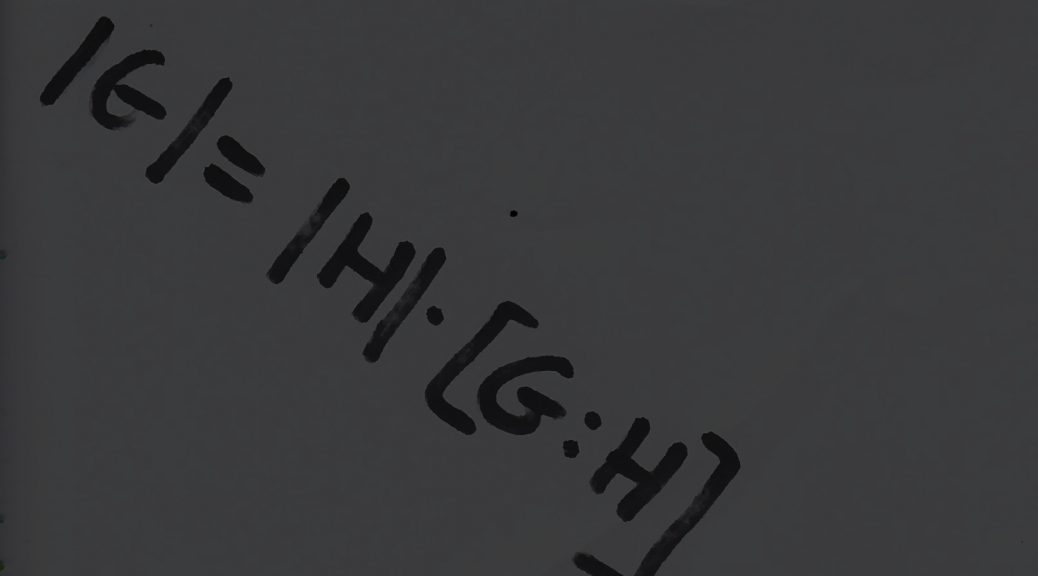 The group is a notion even more primitive than the ring, because in case of a group we will be only considering one operation (depending on the context it will be denoted by

with a fixed neutral element

is a group if

If additionally the operation

is commutative, i.e. for any

, then such a group is called an abelian group. Actually, in this case

is usually used to denote the operation (thus we use

is a commutative ring with an identity, it is an abelian group with its operation

) as well, which is called the additive group of this ring. Also the set of units of a ring

is an abelian group with operation

. This group is called the multiplicative group of

The set of all matrices

with operation of multiplication and neutral element

, is a group. Notice that this group is not abelian.

is a subgroup if

. We denote this by

E.g. the set of all matrices

is a subgroup of

. It is denoted by

are groups, is a homomorphism, if for any

is a homomorphism between the additive groups of those rings. Also,

is yet another example of a homomorphism.

Order of an element and of a group

The order of a group

is it is finite. In the other case we say that the order of the group is infinite.

The order of an element

, is the least natural number

is the additive group of

(zero is the neutral element, and

is the operation here).

A group is a torsion group if all its elements are of finite order.

Cosets of a subgroup

is a left coset of

The set of all left cosets is denoted by

. Its cardinality is called the index of

. Lagrange’s Theorem states that in every finite group

is normal, if for any

. This is denoted by

It is important to notice that for every homomorphism its kernel is a normal subgroup.

We say that a subgroup

is generated by a set

is the least subgroup containing

, which is denoted by

. In particular, then (if

is the set of generators of the group

and then the group

is called a cyclic group.

Notice that all subgroups of a cyclic group are cyclic, and if an order of the group is finite, there is exactly one subgroup of order equal to a divisor of the order of the whole group.

A permutation of a given set is a bijection from this set onto itself, which can be also understood as an ordering of its elements in the case of finite sets. The set of all permutations of a set

. Permutations can be composed, so along with operation

it is a group.

In particular, we will take interest in permutations of the set

. The set of such permutations will be denoted by

is an element of

. We will denote the permutations as two rows of numbers, in the upper row the arguments and in the lower the values corresponding to them. Thus the considered above permutation can be denoted as:

Thus, we have for example:

is a cycle if there are

is constant on all other elements. Such a permutation will be denoted simply as

. Thus, in the above example,

We can easily notice that any permutation can be decomposed into an composition of disjoint cycles, e.g.:

Finally, each cycle can be decomposed into (not disjoint) transpositions (cycles of length

is a normal subgroup of all permutations

, which can be checked quite easily.

Cayley Theorem states that every group

is isomorphic to a subgroup of the group

can be identified with a permutation of the group

is a normal subgroup, then the set

of posets can be regarded also as a group with operation

. This makes sense only if

is a normal subgroup, because only then we can be sure that the operation is well-defined, by which we mean that if

There is a natural homomorphism, which is onto,

Moreover, the homomorhpism theorem states that if

is a homomorphism, then there exists exactly one monomorphism

is the projection defined above. In particular, the groups

(finitely or infinitely many,

), the Cartesian product of these groups

is the Catesian product equipped by the coordinatewise operation. Its subgroup is the so called direct product

of all elements with finitely many non-neutral coordinates.

For groups with notation

we use the term direct sum and write

On can notice that if

is a group and

is a family of groups with

. In such case we also say that

It is worth noticing that

is a factorization of

. Actually, it is true for any finite abelian group

in the following sense,

. Finally, every abelian group of order

The set called the centre of the group

is a normal subgroup of

, which “measures” how much

is commutative. On the other hand let

is a commutator of

. It is also a normal subgroup of

and it measures how

is non-commutative. In particular, a homomorphic image of

is abelian if and only if the kernel contains

is called an adjunct of

and the set of all adjuncts of

will be denoted by

, which means that in the case of finite groups the

is a divisor of

. Even more can be said in the case of permutations. Namely,

are conjuncts if and only if their decompositions into disjoint cycles contain the same number of cycles of the same lenght. E.g.

are conjuncts, because for

We say that a group

acts on a set

, if there exists a homomorphism

. Cayley’s Theorem describes an action of a group on itself. Another obvious example is the action of

on the set of verteces of

is called an orbit of

. Obviously orbits give a partition of

is the set of fixed points. Notice that for every

is a subgroup of

, and is the group of stabilizers of

It is crucial to notice that

. In particular this means that the cardinality of every orbit is a divisor of the order of

as a sum of divisors of

An important collorary follows from consideration of group actions, which is Cauchy Theorem. This theorem states that if

is a finite group and a prime number