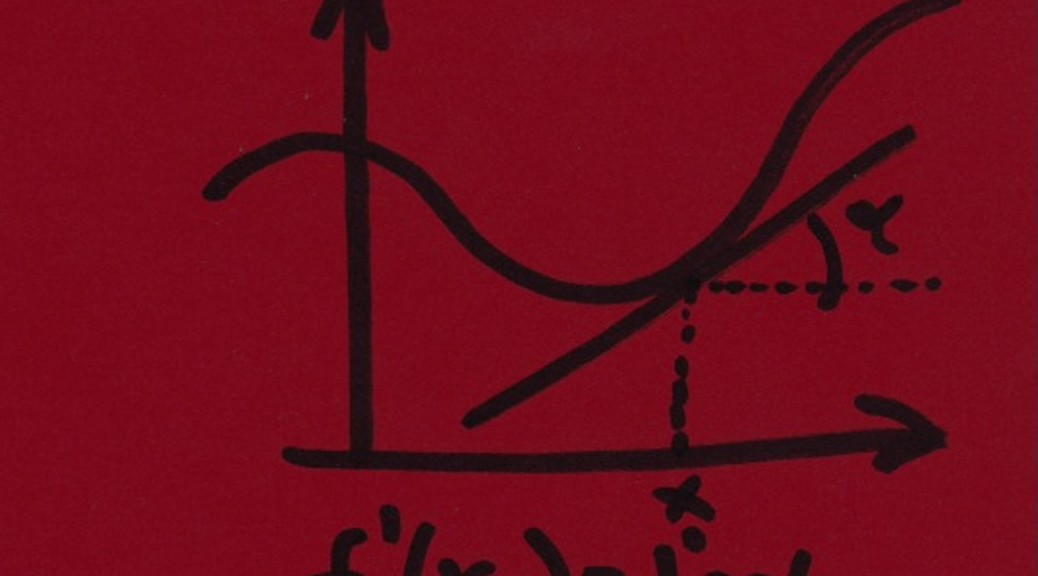 is differentiable in point

, if there exists the limit:

and is finite. Then this limit is called the derivative of

so this limit is infinite.

so the limit we need does not exist.

Derivatives of some simple functions

It is easy to calculate the following facts. They are useful to calculate derivatives of more complicated functions. Let

The arithmetic theorem of limits of functions implies immediately that:

It is also easy to notice that in the case of multiplication it is not so easy — multiplying the expression in the definition does not give the expression for derivative of the product. Nevertheless, it is easy to check that:

We have the following theorem. Given functions

, if the derivatives of

Local extrema and intervals of monotonicity

, such that there exists an interval

is the least or respectively the greatest value of the function in this interval.

We have the following theorem: if a function

local extreme and the derivative, then

. Attention: the reverse implication does not hold, so the points in which the derivative equals zero are merely the candidates for extrema.

. On the other hand for

the function does not have a local extreme.

We say that a function is strictly increasing (respectively non-decreasing, strictly decreasing, non-increasing) on an interval

The following theorem holds: if

is strictly decreasing on

and strictly increasing on

local maximum (respectively minimum), if there exists an interval

is differentiable in its every point, and

is the local minimum of

, given what we calculated above about its derivative.

Derivative of the inverse function

is strictly monotone and continuous, then

is the equation of the tangent line to

. Therefore the tangent line to this parabola in

Rolle theorem states that if

L’Hôpital’s rule makes it possible to calculate some difficult cases in arithmetic of limits of functions using derivatives. If

, if the second limit exists.

, which describes how the first derivative changes. And further we can calculate the third, fourth, etc. derivatives. Generally

-th derivative will be denoted by

Condition for the existence of a local extremum

The following theorem holds. If for some

has a minimum (respectively, maximum) in

is convex on an interval (a,b), if its graph between any two points

is under its secant line given by those points. In other words if for any

If the reverse inequality holds, the function

(or reversely) and continuous in

, we will say that

is convex on this interval and negative on

is concave on it. Point

Asymptotes are lines which are lines to which the diagram of a function converges. Asymptotes can be vertical, horizontal or oblique. is a right vertical asymptote. Analogously, if

, this line is a left vertical asymptote. E.g.

is a vertical asymptote of this function.

is a respectively right or left horizontal asymptote of this function. Since

is a horizontal asymptote of

is an oblique asymptote (respectively left or right), if

. If such a line is asymptote (assume it is a right asymptote), then

is an oblique asymptote of this function.