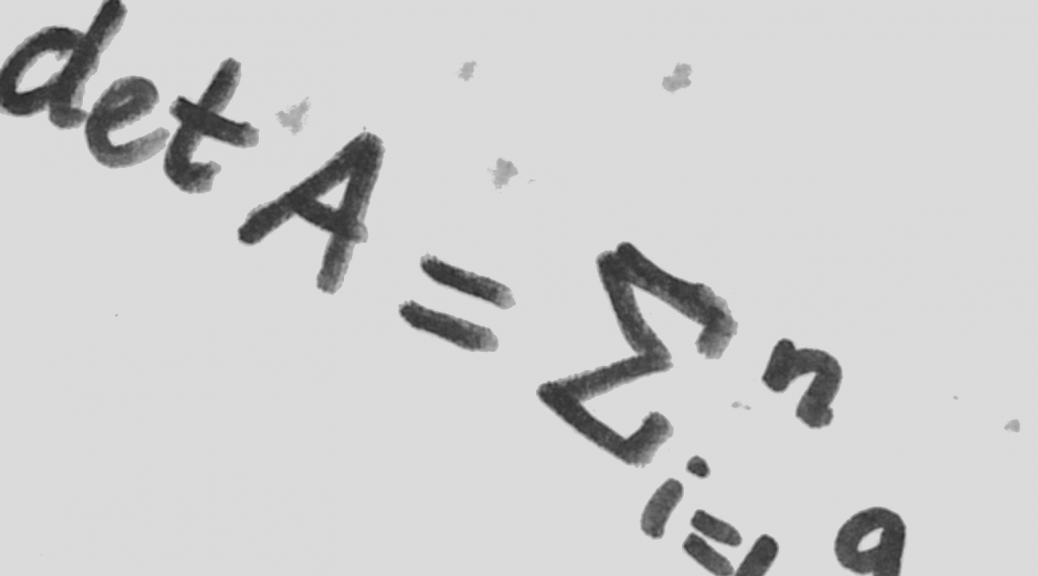 -th column crossed out. So (the determinant is denoted by

or by using absolute value style brackets around a matrix):

The above definition is only a special case of a more general fact called Laplace expansion. Instead of using the first row we can use any row or column (choose always the one with most zeros). So:

. Analogical fact is true for any column.

E.g. for the below matrix it is easiest to use the third column:

Determinant and operations on a matrix

Notice first that from the Laplace expansion we easily get that if a matrix has a row of zeros (or column) its determinant equals zero.

Consider now different operations on rows of a matrix, which we use to calculate a ,,stair-like” form of a matrix. Using Laplace expansion we can prove that swapping two rows multiplies the determinant by

— indeed calculating the determinant using the first column we see that the signs in the sum may change, but also the rows in the minor matrices get swapped.

Immediately we can notice that multiplying a row by a number multiplies also the determinant by this number — you can see it easily calculating Laplace expansion using this row.

Therefore multiplying whole matrix by a number multiplies the determinant by this number many times, precisely:

is a matrix of size

Notice also, that the determinant of a matrix with two identical rows equals zero, because swapping those rows does not change the matrix but multiplies the determinant by

. So because of the row multiplication rule, if two rows in a matrix are linearly dependent, then its determinant equals

Also the Laplace expansion implies that if matrices

-th row in the way that this row in matrix

is a sum of

, then the determinant of

is the sum of determinants of

But it can be easily seen that in general

Finally, consider the most important operation of adding to a row another row multiplied by a number. Then we actually deal with the situation described above. The resulting matrix is matrix

only by the row we sum to. Matrix

is the original matrix and matrix

, in which we substitute the row we sum to with the row we are summing multiplied by a number. Therefore

has two linearly dependent rows, so

. Therefore the operation of adding a row multiplied by a number to another row does not change the determinant of a matrix.

Finally, the matrix multiplication. All the above operations can be written as multiplication by a special matrix. E.g. swapping of

-rd rows in a matrix of size

, is actually the following:

adding to the third row the second multiplied by

It is relatively easy to see that even in the general case the matrix, which changes rows has determinant

, the matrix multiplying a row by scalar

, and matrix of adding to a row another row multiplied by a scalar has determinant

Calculating the determinant via triangular form of matrix

If you look closely enough you will see that the Laplace expansion also implies that the determinant of a matrix in an echelon form (usually called triangular for square matrices) equals the product of elements on the diagonal of the matrix, so e.g.:

Therefore, the determinant of the last matrix is

. On our way we have swapped rows once and we have multiplied one row by

, therefore the determinant of the first matrix equals

The above fact also implies how to calculate the determinant of a matrix which is in the block form:

with left bottom block of zeros. The determinant of such a matrix equals

Now we will make use of determinants and along the way introduce the notion of inverse matrix.

is inverse to matrix

is the identity matrix (the matrix with ones on the diagonal and zeros everywhere else). The inverse matrix is denoted as

. This implies that only matrices with non-zero determinants can have their inverses. Therefore we call such matrices invertible.

How to calculate the inverse of a given matrix? We have mentioned recently that the operations on rows of a matrix leading to the reduced “stair-like” for is actually multiplication by a matrix. Imagine that we transform the matrix

along with the identity matrix into the reduced “stair-like” form. Since

is a square matrix with non-zero determinant, we will get identity matrix on the left side:

. But notice that if

is the matrix of rows operations, then

. The first equation implies that

. So we get the inverse matrix on the right after those operations!

E.g. let us calculate the inverse of the following matrix:

Determining one element of the inverse matrix

-th column we have the determinant of matrix

-th column, there is no mistake there, a transposition plays a role here) multiplied by

and calculate the determinants, and get:

which agrees with the result obtained by the first method!

Given a system of

variables we may try to solve it with Cramer’s rule. Let

be the matrix of this system without the column of free coefficients. Let

, in which instead of

-th column we put the column of free coefficients. Then:

E.g. let us solve the following system of equations:

, this system has exactly one solution. To determine it we calculate the other determinants: