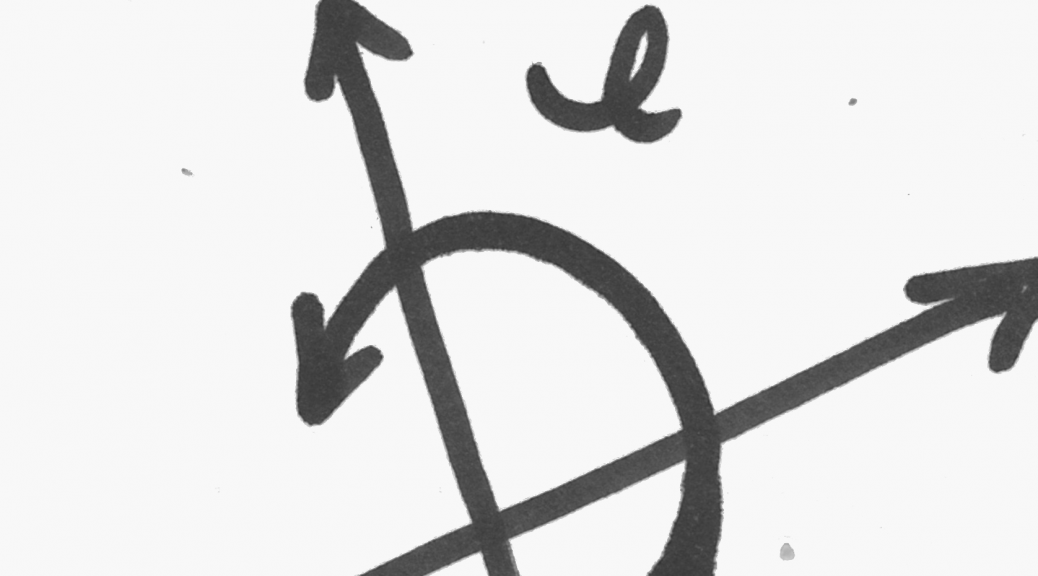 is a map which maps vectors from a given space

, to vectors from another linear space

), and satisfying the linear condition, which says that for every vectors

. E.g. a rotation around

is a linear map

Therefore, to prove that a given map is a linear map we need to prove that for any two vectors and any two numbers it satisfies the linear condition. E.g.

is a linear map because if

Meanwhile, to disprove that a map is linear we need to find an example of two vectors along with two numbers such that the linear condition fail for them. E.g.

is not a linear map because

Usually, linear maps will be given by their formulas. E.g.

. Then to see what

does to a given vector, e.g.

, we substitute it to the formula:

. By the way, it is easy to see, that this is simply the rotation around

Sometimes we can define a linear map by giving its values on the vectors from a given basis only. This suffices to determine this map. E.g. let

be given in the following form:

constitute a basis of the plane). We can calculate the formula of this map. First calculate the coefficients of the standard basis in the given one (by solving a system of equations or by guessing). In this case we see that

is a linear map. So after transforming the matrix to the reduced echelon form on the right hand side one will find

. Obviously we add and multiply by coefficients. So e.g. if

is a vector space itself. It is denoted by

and the result via

getting a vector form

Such a map is denoted as

we can easily get the formula for

is a direct sum of its subspaces, then

, we call the projection onto

is the inclusion of

is the homothety with ratio

it is the identity, denoted by

it is the zero transformation.

Finally, the rotation by angle

Kernel and image of a linear transformation

is a linear transformation, then it is easy to see that

called the kernel of

called the image of

are linear subspaces of

respectively. The dimension of the image of

is also called the rank of

A linear map which is one-to-one is called a monomorphism. It a map is ,,onto” it is called an epimorphism. If it is a bijection, we call it isomorphism.

is neither epi nor mono, but if considered as a map

it is an epimorphism. The reflection across

is an isomorphism. Inclusion

is an example of a monomorphism.

It is easy to see that a map

is a monomorphism if and only if

, but it is an epimorphism if

is a isomorphism, then

, then the notions of isomorphism, monomorphism and epimorphism

Two spaces are isomorphic if there is an isomorphism between them, and we denote this by

. Notice that two finitely dimensional subspaces over a field

are isomorphic if and only if the dimensions are equal (to see that it is true, consider bases!).

It is easy to prove that

In the last case

is called the inverse map to