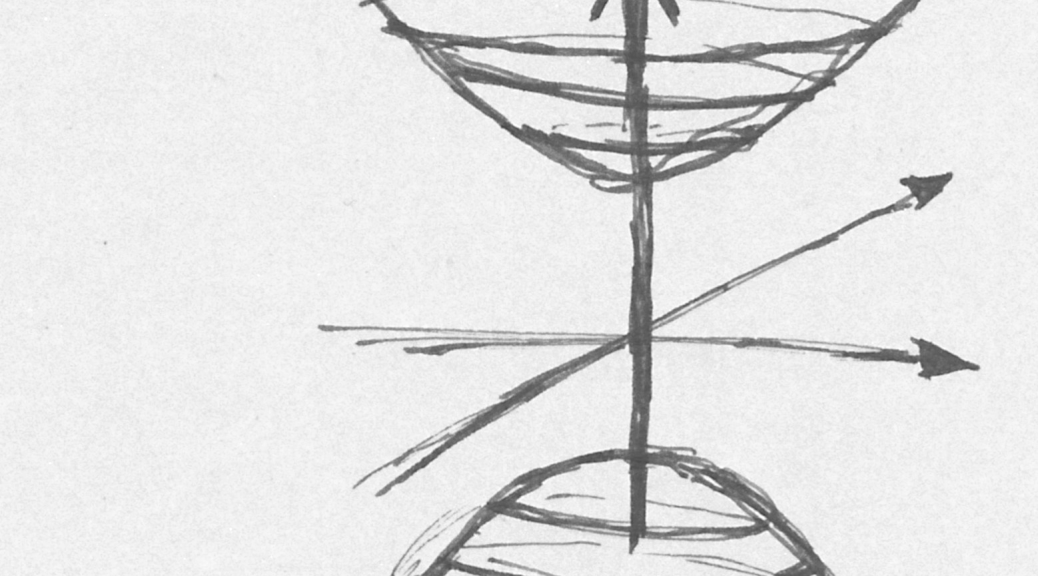 A quadratic form is a function which assigns a number to each vector, in such a way that it is sum of products of two coordinates, e.g.

. The square of the norm is also an example of a quadratic form (

In other words, a quadratic form can be described as

is a bilinear form. We can always take a symmetric bilinear form, if the characteristic of the field is not equal to

, and we are going to make such an assumption from now on.

We can classify forms with respect to possible sign of results:

Obviously a form may not fall in any of those categories, if for some

. Such forms are called indefinite.

Matrix of a form

The matrix of a quadratic form

is a symmetric bilinear form such that

so notice, that the coefficients are divided by

outside the diagonal, because the same expression is generated twice.

Sylvester’s criterion determines whether a form is positively definite or negatively definite. Notice that it does not tell anything about the categories with semidefinite forms!

be the size of the matrix of this form. Sylvester’s criterion consists of the two following facts:

But to check everything (including semi definiteness), we have to diagonalize the form, i.e. find a basis in which its matrix is diagonal (a diagonal congruent matrix). Then, obviously if:

It can be done it the tree following methods

Diagonalization of a form: complementing to squares

We may complement a formula of a form to squares making sure to use all expressions with the first variable first, and then all with the second one, and so on.

, so the form is non-definite. The basis

, in which the formula is expressed is

Diagonalization of a form: orthogobal basis

We may also find an orthogonal basis with respect to the symmetrical bilinear form related to the considered quadratic form. Then the entrees on the diagonal are the values of the form on the vectors from this basis.

Diagonalization of a form: eigenvalues

Finally, we shall remind ourselves that there exists a basis consisting of eigenvectors of a self-adjoint endomorphism described by the same matrix, which is orthogonal with respect to the symmetrical bilinear form related to the considered quadratic form. Then the entrees on the diagonal are the eigenvalues of the matrix.

, so its characteristic polynomial:

, so it has eigenvalues of both signs, so is

A polynomial of degree

is an expression of form

with at least one

not equal to zero, and the space of all polynomials over

is a polynomial of degree

and a basic system

which obviously abuses the notation, since

denotes the polynomial itself and the polynomial function. But for infinite fields it is not a problem,, because we have a bijection between these two sets.

Notice also, that if

can be written as a polynomial function in a basic system, it can written in this form in any basic system. Moreover, the related polynomial is of the same degree.

is an algebraic set, if

are polynomial functions. It is a hypersurface, if

It is easy to notice that over

it it the same thing, since we can take

are equivalent, if there exist basic systems

is described by the same polynomial as

Canonical form of a polynomial function: hypersurfaces of second degree

Every polynomial function of second degree is a sum of a quadratic form and a an affine function, i.e. e.g. if

For every polynomial function of second degree (thus every equation describing a hypersurface of second degree) it is possible to find a basic system in which the function takes one of the following forms:

is the rank of

How to transform the function to such a form? First we have to diagonalize the form

and describe the function

in the new basis. It changes the basis but not the origin of the basic system. Now, for each variable

appearing with a non-zero coefficient

for which we have

with a non-zero coefficient

, we can introduce a new variable

. This changes the constant and the origin from

is the basic vector related to the variable

. If there are no other variables in

, we have already reached the first form. If there are other variables (for which there is no

), then we make from them and the constant coefficient a new variable

, which obviously change both the basis and the origin of the basic system.

, and for the basic system we get

, so the final basic system is

In the second case, let

, and the basic system is

so the final basic system is:

Canonical form of a polynomial function of second degree: hypersurfaces over

Notice that additionally an equation can be always divided by a free variable (if it is non-zero), changing it into

and if we are over

the basic vector related to

can be divided by

which changes this expression to

changing this expression to

Thus for every equation of second degree over

, there is a basic system in which the equation takes one of the following forms:

Thus for every equation of second degree over

, there is a basic system in which the equation takes one of the following forms:

E.g. reformulating further on the equation

, we see that it is equivalent to

, which is in basic system

it is equivalent to

is a centre of symmetry of a hypersurface described by equation

. It is easy to prove that

, i.e. its partial derivatives are zero at these points.

Thus, if we consider the canonical forms of the equations, we see that a hypersurface described by

. On the other hand, a hypersurface described by

has no centre of symmetry.

Affine types of hypersurfaces of second degree over

The above means that the type of equation which describes a given hyperspace is a constant. I.e. if in a basic system it takes one of the forms

, in any other basic system it cannot take any of the other forms.

is the number of variables with coefficient

in the above equation, then if the equation is

is the same for every basic system in which this equation is in the canonical form.
If the equation is of form

, then we also get such a result but up to multiplication by

, i.e. in every basic system in which the equation is in the canonical form, we get

These possibilities are called the affine types of hypersurfaces.

We shall say that the hypersurface is proper, if it is not included in any hyperspace.

Affine types of proper curves of second degree in a pair of intersecting lines Affine types of proper surfaces of second degree in

a pair of parallel planes hyperboloid of one sheet