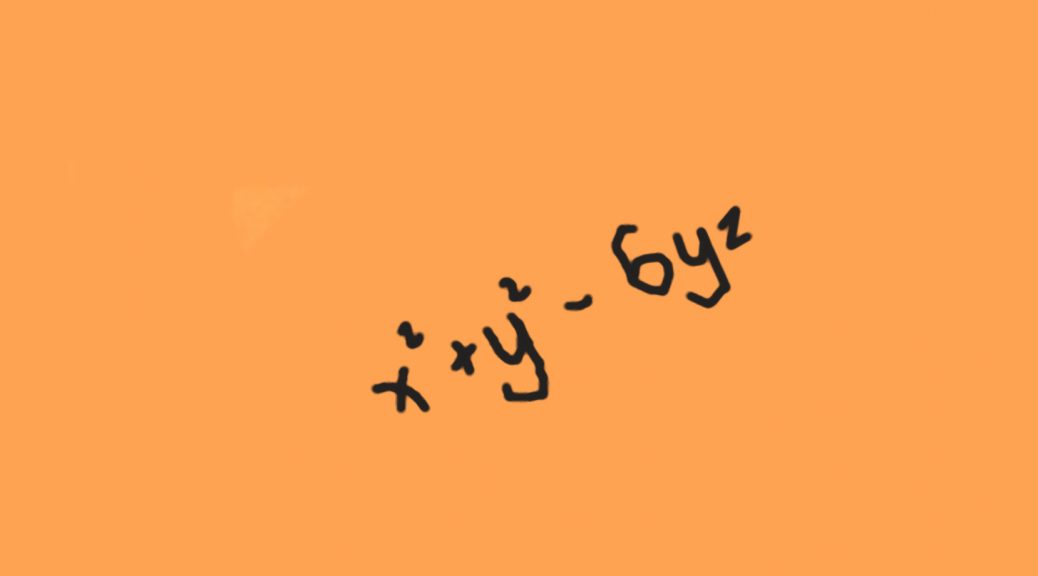 A quadratic form is a function which assigns a number to each vector, in such a way that it is sum of products of two coordinates, e.g.

. The square of the norm is also an example of a quadratic form (

In other words, a quadratic form can be described as

is a bilinear form. We can always take a symmetric bilinear form, if the characteristic of the field is not equal to

, and we are going to make such an assumption from now on.

We can classify forms with respect to possible sign of results:

Obviously a form may not fall in any of those categories, if for some

. Such forms are called indefinite.

Matrix of a form

The matrix of a quadratic form

is a symmetric bilinear form such that

so notice, that the coefficients are divided by

outside the diagonal, because the same expression is generated twice.

Sylvester’s criterion determines whether a form is positively definite or negatively definite. Notice that it does not tell anything about the categories with semidefinite forms!

be the size of the matrix of this form. Sylvester’s criterion consists of the two following facts:

But to check everything (including semi definiteness), we have to diagonalize the form, i.e. find a basis in which its matrix is diagonal (a diagonal congruent matrix). Then, obviously if:

It can be done it the tree following methods

Diagonalization of a form: complementing to squares

We may complement a formula of a form to squares making sure to use all expressions with the first variable first, and then all with the second one, and so on.

, so the form is non-definite. The basis

, in which the formula is expressed is

Diagonalization of a form: orthogobal basis

We may also find an orthogonal basis with respect to the symmetrical bilinear form related to the considered quadratic form. Then the entrees on the diagonal are the values of the form on the vectors from this basis.

Diagonalization of a form: eigenvalues

Finally, we shall remind ourselves that there exists a basis consisting of eigenvectors of a self-adjoint endomorphism described by the same matrix, which is orthogonal with respect to the symmetrical bilinear form related to the considered quadratic form. Then the entrees on the diagonal are the eigenvalues of the matrix.

, so its characteristic polynomial:

, so it has eigenvalues of both signs, so is