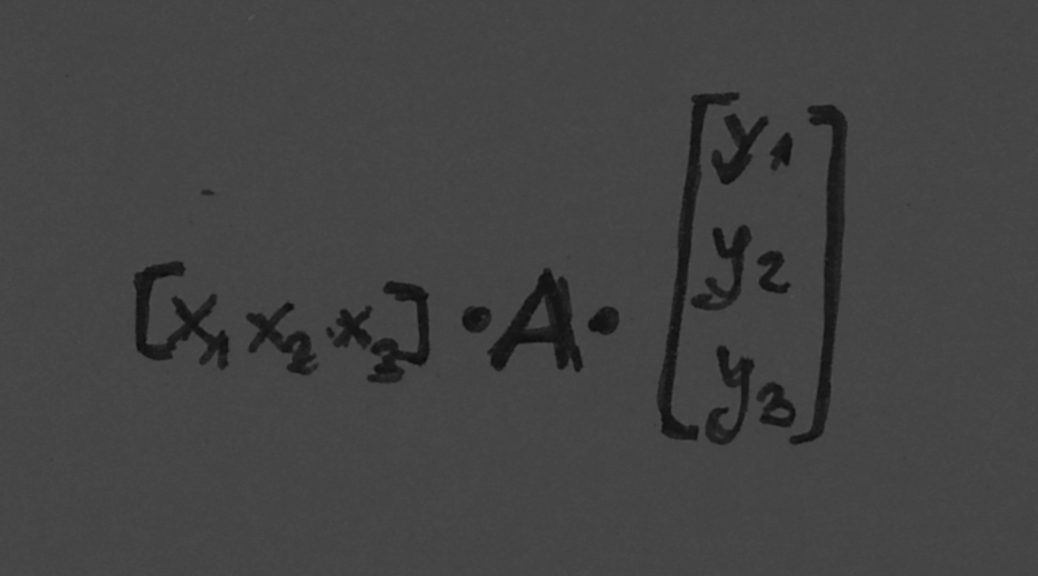 A bilinear form is a function

is a vector space over

Matrix of a bilinear form

, one can easily notice that if

gives the coordinates of this vector in

Which motivates the following definition. Matrices

if and only if there exists a reversible matrix

are congruent if they are matrices of the same bilinear form in two different bases.

It is easy to notice that if two matrices are congruent, they have the same rank, and one of them is invertible if and only if the second is. A form

is nondegenerate if its matrix (in any basis) is invertible.

is symmetrical if and only if

is a matrix of such a form in any basis, then

is a symmetrical matrix, i.e.

along with a symmetric bilinear form

is degenerate, if and only if there exists a non-zero vector

. A vector perpendicular to itself is called a null vector.

is a subspace, then

is also a subspace.

is a nondegenerate subspace of a bilinear space

is degenerate then there exists

. Reversly, we have to prove that for every

there exists uniquely a decomposition

, then the existence of such a decomposition is equivalent to existence and uniqueness of coefficients

, which gives exactly a system of equations of form

and if it is invertible (which means that

is nondegenerate), means that there exists a unique solution to this system of equations.

Similarly as in the case of euclidean spaces, a basis

is orthogonal (or perpendicular), if for

is a field of character not equal to

, then an orthogonal basis exists (over

it may not exist!). The proof is inductive and shows the procedure to find such a basis. If there exists a non-null vector

then we take it to the basis. By the above theorem if

is nondegenerate. So we can then recursively find an orthogonal basis of

. If on the other hand we encounter a space such that there is no more non-null vectors, then any basis is orthogonal (every two vectors are perpendicular). Indeed,

for subsequent vectors of the orthogonal basis.

, then we can divide every non-null vector

from the orthogonal basis by

, i.e. we may consider vectors

is null). Then for non-null vectors we get:

. In other words, the matrix of

on the diagonal. This means, that every real symmetrical matrix is congruent over reals to a matrix with only

on the diagonal. If

is a symmetrical matrix, then the number of

in such a congruent diagonal matrix is denoted by

and the signature of

are congruent over reals if and only if

Over complex numbers, it is even easier, because we can divide by

without the absolute value. Thus, for all non-null vectors we get

. This means that the matrix of

on the diagonal. In other words, every symmetrical matrix is congruent over complex numbers to a diagonal matrix with only

are congruent over complex numbers if and only if

What is the relation between finding a diagonal congruent matrix (i.e.

Recall that a symmetric matrix

(with respect to the standard inner product in

). Moreover, we know that such endomorphisms have an orthonormal basis

consisting of eigenvectors, i.e. such that

has the property that

are not only similar but also congruent! This means, that the diagonal matrix consisting of eigenvalues of the matrix

(with appropriate fold) is congruent to

, which yields a new method of finding an orthogonal basis for a given form.