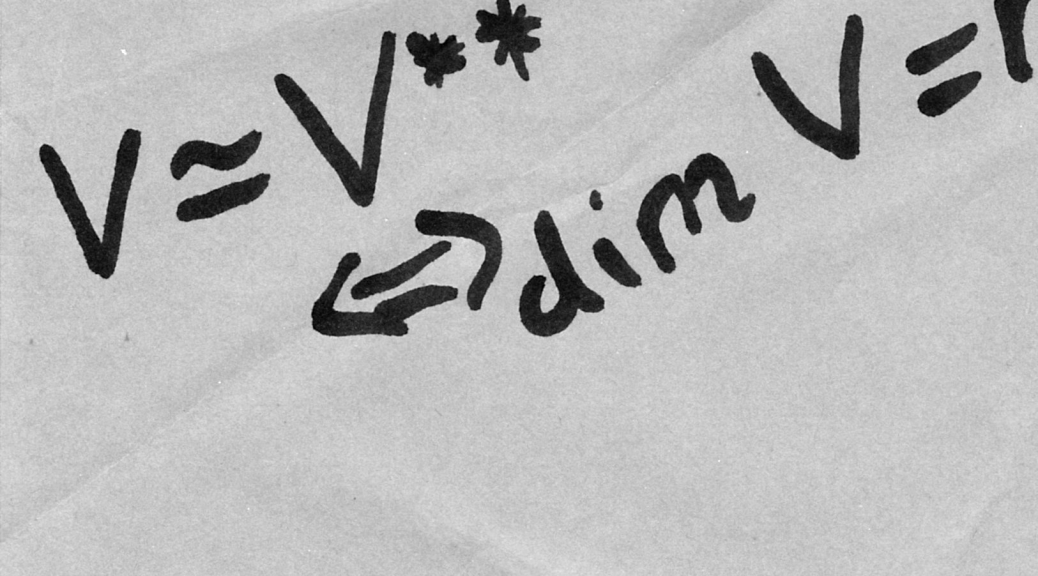 be a vector space over

, then the space dual to

, the space of all linear mappings into the field called also linear functionals or linear forms.

Notice that for any subspace

, there is a fuctional

. To see this, complete a basis of

, is such a way that vector

is in the completed basis and define the values of the fuctional in this basis accordingly.

, to satisfy the above conditions has to be the following

Therefore, given a basis of a finite-dimensional space

, we can find functionals

. Notice, that those functionals are a basis of space

and this basis is called the dual basis to

, the dual basis is

Notice also that given a functional

, its coordinates in the basis

are the values of this functional on vectors

, because the left and right side of this equation are equal when calculated on argument equal to

The existence of the dual basis shows that if

, and for given basis

we have an isomorphism

This is not true in the case of infinitely dimensional spaces. Notice that, for example, the dual space

, so it is not isomorphic to

(the series is convergent because sequence

equals zero from some point on).

Notice that every vector

is related to a functional

) given by the formula

), and actually is a monomorphism. Thus, if

is a linear mapping, then

is called its dual mapping.

It is easy to notice, that

is an isomorphism, then

is an isomorphism as well.

Moreover, one can check that if

is a monomorphism, then

is an epimorphism. On the other hand, if

is an epimorphism, then

Some things get easier under the assumption that the dimensions are finite. It becomes clear that then

are respective dual bases then

is the transposition, meaning that the rows are swapped with columns. Indeed, if

is the entry in the

, and this is the entry in

It is also worth mentioning that in the finite dimensional case, after identifying

Dual space to an unitary space

is an unitary space, we get an easy identification between

. One can prove that

is a bijection and

with modified operation of multiplication

. From this point on we will be identifying

is self-adjoint if and only if

is self-adjoint if and only if its matrix in an orthonormal basis is hermitian.

There is a common property of self-adjoint endomorphisms and unitary automorphism. For both of them we get

. The mappings satisfying this condition are called normal endomorphims. One can prove that an endomorphism has an orthonormal basis consisting of eigenvectors if and only if it is normal.