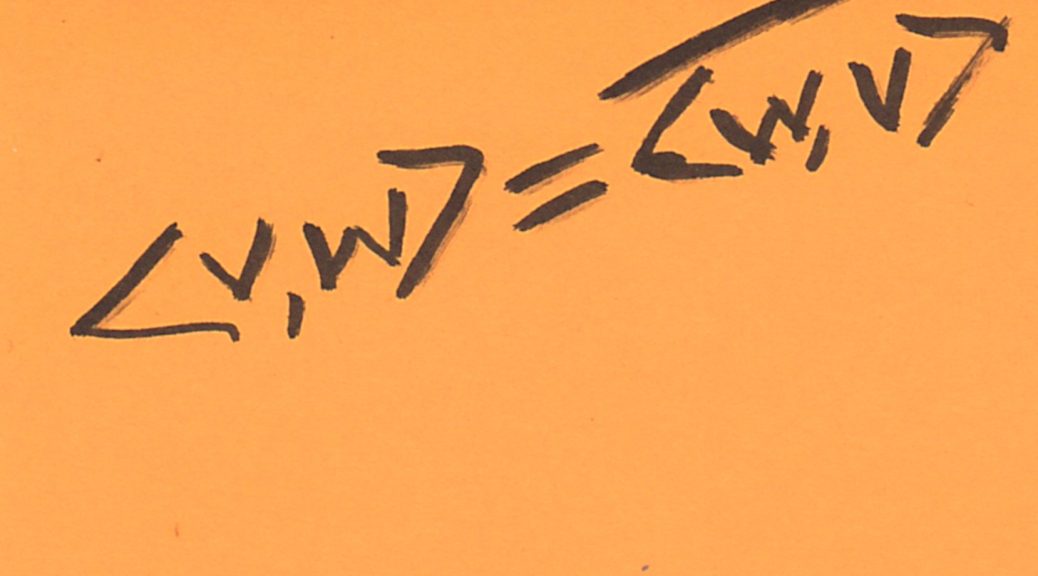 . Meanwhile the distance of a complex number

. This is the idea of the following definition and all subsequent definitions.

We shall say that a form

The matrix of a sesquilinear form

are any vectors and

are their coordinates in basis

is a hermitian inner product if

for any non zero

(observe that it is always a real number).

along with a fixed hermitian inner product is called an unitary space.

The standard hermitian inner product in

is defined by the following formula

Similarly as in the case of euclidean spaces one can define the norm, perpendicularity, orthogonal and orthonormal bases.

The counterpart of an isometry is an isomorphism of unitary spaces, i.e. a linear isomorphism which preserves the hermitian product (unitary isomorphism).

with respect to some orthonormal basis is such that

. Such matrices are called unitary matrices.

Adjoint space to an unitary space

is an unitary space, we get an easy identification between

. One can prove that

is a bijection and

with modified operation of multiplication

. From this point on we will be identifying

is self-adjoint if and only if

is self-adjoint if and only if its matrix in an orthonormal basis is hermitian.

Diagonalization of endomorphisms of an unitary space

Similarly as in the case of a space over reals, we may notice that every self-adjoint endomorphism of an unitary space has an orthonormal basis consisting of eigenvectors, and moreover the eigenvalues are real.

Another example of an mapping which is diagonalizable in an orthonormal way is an unitary automorphism. Indeed, let us prove it by induction. For one-dimensional space it is obvious. Let as assume that it is so for

be an unitary automorphism. There exists an eigenvector of

, since it is an automorphism), thus the space

-dimensional and invariant under

We then take the basis from the induction hypothesis and add

There is a common property of self-adjoint endomorphisms and unitary automorphism. For both of them we get

. The mappings satisfying this condition are called normal endomorphims. One can prove that an endomorphism has an orthonormal basis consisting of eigenvectors if and only if it is normal.