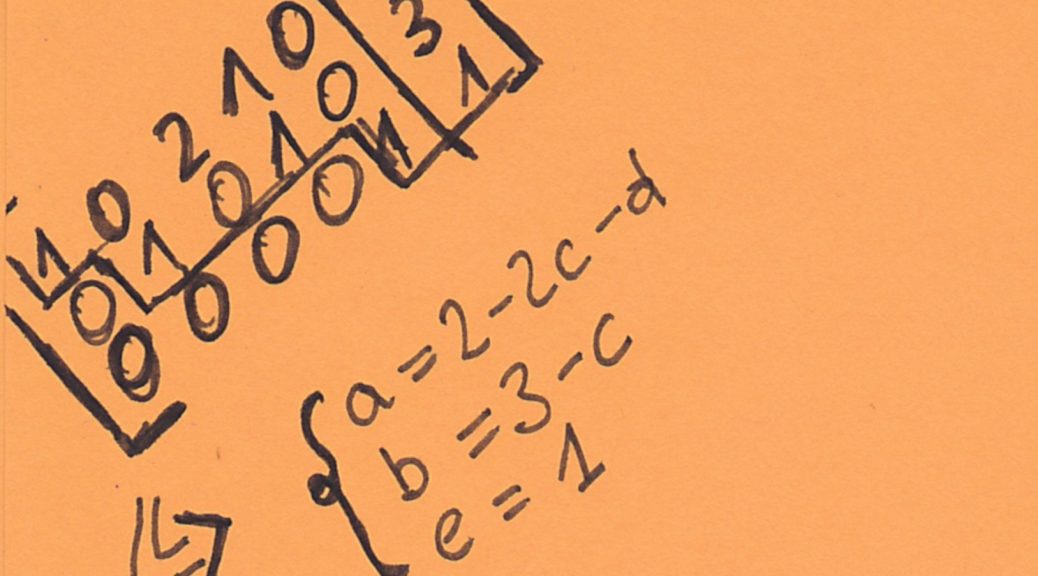 is simply a set of

equations, in which the variables appear without any powers or multiplication between them:

are some real numbers. E.g. the following is a system of 3 linear equations with four variables:

A solution of such a system of linear equations is a tuple of four numbers (four is the number of variables in this case), which satisfies all the equations in the system (after substitution of those numbers under the variables). E.g. (2,0,0,0) in our case. But a system can have more than one solutions. For example, (22,-7,1,0) is also a solution to the above system. More precisely a system of linear equations can have 0, 1, or infinitely many solutions.

A general solution of a system of linear equations is just a description of a set of all its solutions (which sometimes may mean saying that there are no solutions at all, or pointing out the only one). How to find a general solution? We will use so called Gaussian elimination method. Less formally we will call it transformation of our system of equations into a echelon form.

The first step is to write down a matrix of a given system of equations. A matrix is simply an rectangular table with numbers. Matrices will play more and more important role in this course, but now we can just think of a matrix of a system of equations as of an abbreviated notation of the system itself. Simply we write down the coefficients separating the column of free coefficients with a line:

Next we make some operations on this matrix. Those operations simplify the matrix, but we shall make sure that they do not change the set of solutions of the corresponding system of equations. Therefore only three types of operations are permitted:

And our aim is to achieve a staircase-like echelon form of a matrix (meaning that you can draw a stairs through a matrix, under which you will have only zeros). It means that in each corresponding equation there will be less variables than in the previous one.

The next step is to reduce the matrix (transform it into a reduced echelon form). We would like to have zeros also above the leading coefficients. In our case we only need to do something with 3 on the second place in the first row. To have a zero there we have to subtract the second row multiplied by 3 from the first one.

We need also to make sure that the leading coefficients are always ones (sometimes we have to multiply a row by a fraction number). But in our case it is already done. We have achieved a reduced echelon form. To have a general solution it suffices to write down corresponding equations moving the free variables to the right side of the equations:

all we know in the general solution, so:

. Notice that by substituting

by any real numbers we will get a tuple (sequence of four numbers) which is a solution to our system of equations (it has infinitely many solutions). E.g. substituting

we get the solution

, which was mentioned above.

Finally let us introduce some terminology. A system of linear equations is:

For example the following set:

is not homogeneous, has exactly one solution, so it is not inconsistent. Meanwhile:

is homogeneous and has exactly one solution, so is not inconsistent. On the other hand, the following set of equations is inconsistent:

Note that a system of linear equations can have exactly one, infinitely many or no solutions.