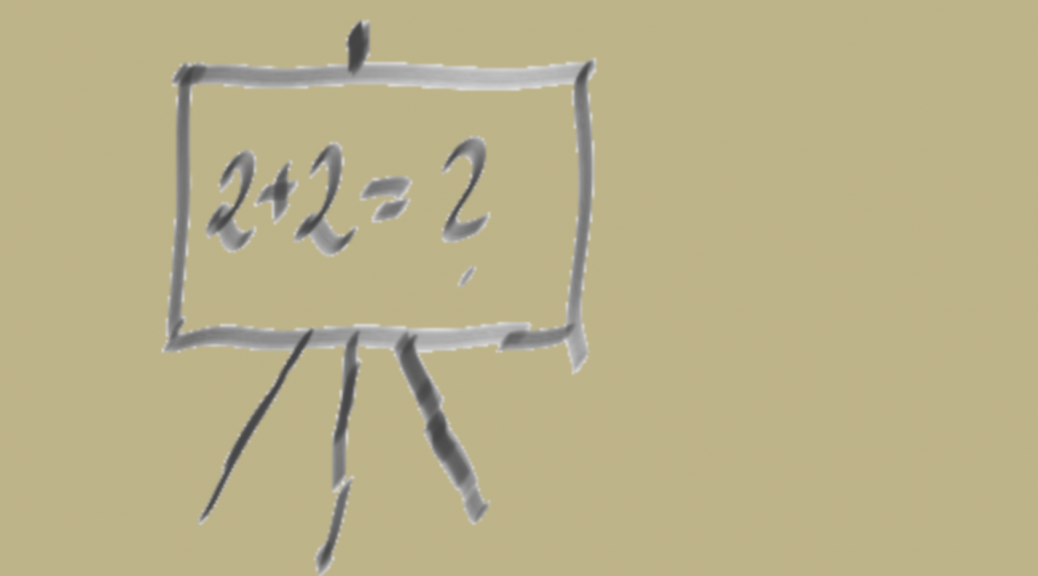 A function of form

is called linear. Its graph is a line. Notice that

is the value the function takes for

, so it is where it intersects

decides on the slope of the line. For

we get an increasing function, for

we get a decreasing functions. The bigger

, the ,,steeper” the line is. Notice that the line

make a right triangle. The rate of its legs is

and is called the tangent of its angle. Thus,

is the angle between a horizontal line and our line.

Notice also that two lines meet at a single point if and only if their slopes are different. To find this point we have to solve a system of two equations. On the other hand if the slopes are equal, and the lines are not equal, they are parallel.

A quadratic polynomial is a function of form

We can write putting the second expression under the square (completing the square):

which is called the canonical form. Notice that this allows us to find the roots (i.e. values for which the expression gives

(we do not have to use any formulas here). Thus,

By the way, it is clear that the minimum or maximum (depending on the sign of

) we get when the squared expression is zero, i.e. for

is called the determinant of the quadratic equation. We get two roots, if

A polynomial is a function of the following form:

are coefficients, i.e. given real numbers. So constant, linear or quadratic functions are examples of polynomials. E.g.:

The highest exponent of the indeterminate is called its degree.

How to solve an equation

, where f is a polynomial? If

is quadratic, then everyone knows how to solve it. Just calculate

If the polynomial is of higher degree, e.g.

, then we first need to laboriously guess a root. In our case we guess that it is

, one needs to know that the polynomial is dividable by

(see Bezout Theorem). The divided polynomial is of degree lower by one and has the same roots as the initial polynomial except from

But how to divide one polynomial by another one. One of a few possible methods resembles the usual number division: 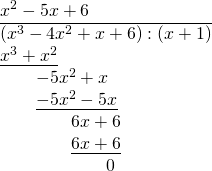 And now it suffices to use

. So the solutions of the equation

Counting permutations is counting of the number of possible orderings of a number of elements. Elements of

-element set can be put in an

-element sequence (without repetitions) in

Variations without repetitions is a more general question. From an

-element sequences (without repetition). Thus it can be done in:

Variations with repetitions is choosing from an

-element sequence, in which the elements can be repeated. It can be done in

Combinations without repetitions is choosing from an

-element subset (i.e. without repetitions and without order). It is easy to notice that

is the number of ways to do it. Thus,

The last symbol is called the Newton’s binomial coefficient.

Finally, combinations with repetitions is the problem of choosing from an

-element collection in which each element can repeat any number of times (but the order does not count). It is equivalent to the problem of putting

boxes. This is equivalent to choosing on which places of

sequence of objects and walls there are

ways to do this.

To sum up we get

Indeed, the chief of a herd of monkeys choosing

monkeys to go for a quest from

-monkey herd can simply do it (left-hand side). He can also first decide whether he goes on the quest. If so, he still has to choose

monkeys left. If no, he chooses

Using this fact, and having for every

can be shown in the following triangle, called Pascal’s triangle, in which every element is a sum of elements above to the left and directly above it.

By the way, we have proved that

we notice that the term

brackets, which is simply

It is a simple combinatorial fact but extremally useful: if

, then there is at least one tree on which two monkeys sleep.